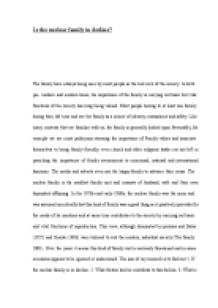 Is the nuclear family in decline?

﻿1s the nuclear family in decline? The family have always being seen by most people as the bed rock of the society. In both pre- modern and modern times, the importance of the family in carrying out basic but vital functions of the society has long being valued. Most people belong to at least one family during their life time and see the family as a source of identity, reassurance and safety. Like many contents that are familiar with us, the family is generally looked upon favourably, for example we see most politicians stressing the importance of Family values and associate themselves to being family friendly, even church and other religious leader are not left in preaching the importance of family environment to communal, national and international harmony. The media and adverts even use the happy family to advance their cause. The nuclear family is the smallest family unit and consists of husband, wife and their own dependent offspring. In the 1950s and early 1960s, the nuclear family was the norm and was assumed uncritically that this kind of family was a good thing as it positively provides for the needs of its members and at same time contributes to the society by carrying out basic and vital functions of reproduction. This view, although dominated by persons and Bales (1955) and Goode (1963) were tailored to suit the modern, industrial society (The family 2001). Over the years it seems this kind of family unit is seriously threatened and in some occasions appears to be ignored or undermined. The aim of my research is to find out 1. If the nuclear family is in decline. 2. What factors lead or contribute to this decline. 3. What is a good nuclear family? Many sociologists have long agreed that the family is a universal social institution. Others claim that groups of kins living together as recognised social units occur in all human societies, but some do argue that there are exceptions to virtually any definition of family. ...read more.

Also there are more extended families especially people from some ethnic minority communities. According to statistics first marriages numbered 221,100 in 1961 and declined 345,000 in 2005. And also second marriages were reduced, giving the suggestion that the nuclear family is in decline. But many statistics might not be as accurate as the numbers of people that are single and available are not known. In 1991 average age for marriage was 27.5 for men and 25.5 for women. Thus not only are fewer people marrying, it appears more are doing so at a later age. In 2005 this age has increased to 31.7 and 29.5 respectively and the number of those who have never marriage have increased from year to year. The issue of co-habitation according to statistic is a trend that have affected traditional nuclear family as an institution.by 2002,there were 25% of unmarried adults that were co habiting, while of this 50% of women are involved. This suggest that formal marriage might be in decline but family format is still desirable (social treds.www.curriculumpress.co.uk.no36) There have being evidence for changes in family structures as 2% of households were single parents families with dependent children in 1960,this increase to 7% in 2003.20% of under 19 year olds were living with one parents family in 2004, and even amongst people of Caribbean origin, this figure is much higher(36%). Most single families are headed by women, three quarters of the children of single parents did at birth live with two perents.but the proportion of mothers who have never married are fast increasing. According to Moore et al (2005) 726,001 children were estimated to live in reconstituted families in 2003 i.e. over 10% of children. In 2002 government statistic showed that 25% of households of people of Asian origin wee extended be young single people, couples or parents(s) with dependent children. Some of these can be said to be changing trends in family structures but can it be attributed to a decline in the nuclear family as an institution? ...read more.

It appears that the nuclear family have both an uncertain past and an uncertain future. Different opinions agree that the nuclear family have undergone lots of changes and what they mean is open to interpretation.as society changes and the role of the family within society changes, we are offered different views to evaluate and critique the ideology of the nuclear family. In political rhetoric- as we read in the media and our everyday lives, the family is clearly in transition. We are living therefore in a transitional and contested period of family history (stacey1990) The postmodern family is not a new model of family, not the next stage in an orderly progression of family history, but the stage when the belief in a logical progression of stages breaks down, rupturing evolutionary models and incorporating both experimental and nostalgic elements. The postmodern family lurches forward and backwards into an uncertain future (Stacey 1990). It may be well that the functionist and and new right theorist overstate the extent to which the nuclear family as it currently operates can satisfy the needs and aspirations of both males and females, thou feminists and Marxist analysis of the actual operation of the nuclear family are in many cases justified, there is evidence from these research that values, altitudes and behaviours within the family are changing. Thus many marriages, co habiting relationships and civil partnerships are increasing and appear to be accepted. The wide spread existence of empty shell marriage suggest that the nuclear family is in decline. However all families are not same and might mean different things to different people. Therefore the family is not a single identifiable thing. We recognise them when we see them but are very different from one another. Whether or not the institution of the nuclear family is in decline will partly depend on how the family is defined. Taking the traditional nuclear family, it could be said to be in decline and the factors that gave rise to it have being enumerated. A good family can be said to be that which serve the unique values of its member?s. ...read more.