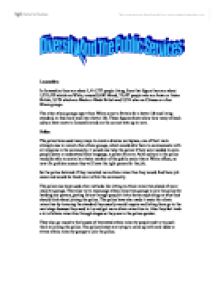 Lancashire In Lancashire there are about 1,414,727 people living, from that figure there are about 1,321,420 which are White, around 9,490 Mixed, 75,407 people who are Asian or Asian British, 3,179 which are Black or Black British and 5,231 who are Chinese or other Ethnic groups. The other ethnic groups apart from White came to Britain for a better life and living standard, to find work and live a better life. These figures above show how many of each culture have move to Lancashire and are the correct stats up to now. Police The police have used many ways to create a diverse workplace, one of their main attempts was to recruit other ethnic groups, which would able them to communicate with all religions in the community, it would also help the police if they were needed to calm people down or understand there language, a ...read more.

Also they fast track a lot of ethnic minorities through stages so they can in the police quicker. They also go round to the houses of interested ethnic minority people and try to push them to joining the police. The police always are trying to come up with new ideas to attract ethnic minority groups to join the police. In the past the police force weren't accessible within the community much, they were only accessible to some parts of the community and not all. E.g. the police were only really accessible within the White British community and they weren't really reaching the newer part of the community like the Asians and Eastern Europeans, they have set aims to recruit a certain amount of different minorities. Equality The Police have aimed to promote equality in the recent years by recruiting equal amounts of ethnic groups, making the recruitment stage for the police equal to all people, showing the police take into account equality. ...read more.

The police forces scheme is to make there communities equal and to that need to make people understand each others cultures. The police force also has meetings each month with heads of each community to try and see what they can all to see and improve equality and friendship between each community and help society live without equality and tension that is within all the community. This is done with the fire service as well, in some community talks they attend to. Analysis The Lancashire police force have tried to develop a diverse police force in many ways and have worked hard in trying to develop a diverse work force which they wanted 7% of the police force to be ethnic minority. But I think overall they have been successful in their mission, they have managed to bridge racial gaps and have created a diverse workforce for all the community. ...read more.