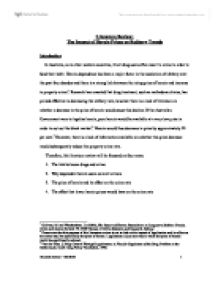 Literature Review: The Impact of Heroin Prices on Robbery Trends

Literature Review: The Impact of Heroin Prices on Robbery Trends Introduction In Australia, as in other western countries, illicit drug users often resort to crime in order to fund their habit. Heroin dependence has been a major factor in the escalation of robbery over the past four decades and there is a strong link between the rising price of heroin and increase in property crime1. Research has revealed that drug treatment, such as methadone clinics, has proved effective in decreasing the robbery rate; however there is a lack of literature on whether a decrease in the price of heroin would cause this decline. If the Australian Government were to legalise heroin, pure heroin would be available at a very low price in order to cut out the black market.2 Heroin would thus decrease in price by approximately 50 per cent.3 However, there is a lack of information available on whether this price decrease would subsequently reduce the property crime rate. Therefore, this literature review will be focused on four areas: 1. The link between drugs and crime 2. Why dependent heroin users commit crimes 3. The price of heroin and its effect on the crime rate 4. The effect that lower heroin prices would have on the crime rate 1. The link between drugs and crime There is an abundance of evidence which clearly reveals that dependent drug use and crime are causally connected. Maher et al states that in a sample of 202 heroin users, 70 per cent indicated that they derived a portion of their income from acquisitive property crime, which includes burglary, shoplifting and un-armed street robberies. ...read more.

Chilvers and Weatherburn discuss this problem, stating that there is a significant lack of national and international literature available on the price of heroin and its effect on the crime rate.24 Therefore, minimal research is available in this field. Despite this, the article by Donnelly et al was very thorough and provided evidence of this trend in Cabramatta and in New South Wales. Moreover, this article provided information on the method chosen and the exact formulas that were used to generate the conclusion that the steep price increase that occurred during Christmas 2000 was the determinative factor for the increase in robbery. 4. The effect that lower heroin prices would have on the crime rate Only three authors raise the issue of whether a decrease in the price of heroin would lead to a decline in the crime rate. Mukherjee stated that it is the high cost of heroin that causes addicts to commit crime, and 'the implication is, therefore, that a decrease in price may result in a decrease in property crime.'25 However, he fails to substantiate this; rather he merely notes that there has been an increase in the price of heroin, and an increase in robbery rates. He does not discuss this issue further, nor does he generate a conclusion as to why this may occur. The two other articles commissioned the Salvation Army26 and the Dutch Drug Policy Foundation,27 discuss legalisation and its impact on the price of heroin and crime. However, because they are exploring the effect of legalisation on the crime rate, they fail to adequately explore the issue of price of heroin and its correlation with the crime rate. ...read more.