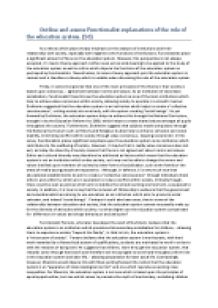 Outline and assess Functionalist explanations of the role of the education system.

For Marxists, the education system is not one which is based upon the principles of equal opportunities, but one which serves to promote the myth of meritocracy, socialising children to accept in equality as endemic and hence keeping class position fixed. Support for Marxists and therefore a statistic which is against the view is that at secondary level, class is a very influential factor over results, with a national 40% divide in performance between the lower and middle class. As a result, it could very much be argued that the education system does not provide social mobility through meritocracy but rather acts as a form of state control, with middle class and upper class (the bourgeoisie) using the education system to maintain dominance. Whilst, we do know that the state does place key emphasis on using the education system as an institution which provides social mobility, with Tony Blair claiming that his priorities were ?education, education, education?, in addition to the introduction of the ?Education Maintenance Allowance? scheme and the new ?pupil premium? initiative. It could therefore be argued that the functionalist perspective is correct, in that the education system is a system based upon a certain degree of meritocracy. ...read more.

In conclusion, it is clear that Functionalists tend to paint a positive picture of the education system, suggesting that it is an institution which promotes social cohesion, social mobility and economic stability. Through its role as an agent of secondary socialisation, the introduction of the national curriculum and the design of the qualification system, functionalists argue that the education system contributes to the positive function of society and to the benefits of its students. However, critics, mainly from the Marxist perspective find that class inequality is perhaps one of the biggest factors that functionalism ignores. Although, it is often the case that governments (at least in principle) do attempt to champion the education system as an institution of social mobility, with policy which aims to reflect and increase this. Furthermore, support for Functionalism also comes from the overwhelming statistics that countries with more graduates tend to have more highly advanced economies,- support the work of Davis and Moore. In all, Functionalism is a theory which tends to lend itself to looking at the positives of the education system, documenting the benefits of it- which all are founded upon both research and also operating realities in many cases. ...read more.

This is a fairly strong essay that compares the Functionalist and Marxist viewpoints using the key theorists and terms. The essay also makes some contemporary links in regard to policies. The essay could benefit from using feminism as a counter argument to Functionalism too as well as further criticisms as to why the Functionalist view is now seen as outdated. Overall: ****