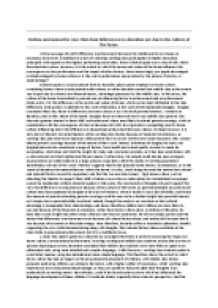 OUTLINE AND ASSESS THE VIEW THAT CLASS DIFFERENCES IN EDUCATION ARE DUE TO THE CULTURE OF THE HOME.

﻿________________ Outline and assess the view that class differences in education are due to the culture of the home. ________________ With an average of a 40% difference in achievement between the middle and lower classes at secondary GCSE level, in addition to a lack of widening working class participation in higher education, principally with regards to the highest performing universities, there is little dispute over a class divide within the education system. However, it is the extent to which the norms and values of the home influence this convergence in class performance and the impact of other factors. More interestingly, are pupils advantaged or disadvantaged by home culture or is the void in performance deep rooted by the nature of society, or material edge? Cultural capital, a concept placed forth by Bourdieu places great emphasis on home culture, correlating home culture to educational achievement, or rather Bourdieu stated that middle class achievement was in part due to cultural, non-financial assets, advantage possessed by the middle class. In this sense, the culture of the home transmitted by parents are an influencing factor to achievement and an achievement divide exists, it is this difference in the norms and values of homes which can be most attributed to the class differences in education. ...read more.

In conclusion, it is apparent that the factors which influence the convergence in class achievement are numerous, and it is not a straight forward matter. In isolating and attempting to analyze each factor, it is not home culture which has the biggest influence over the educational achievement divide, but the perceived home attitude and in addition to this, the ability, or inability of working class pupils to obtain cultural insight which would most place them in line with what happens in school,- as the work of Boudieu suggests. Working class students are at the biggest disadvantage, with material factors influencing parental attendance at parent?s evenings, perhaps creating a view that such parents do not care, as Douglas concluded, when it could be in fact not the case. In addition to this, working class students also are placed at a disadvantage when it comes to the curriculum, in the words of Bourideu they case a ?clash of culture?, which middle class students do not face. Nonetheless, Roker found that differences within the middle class also do exist, and in her study it was placed on school factors, as all girls were middle class but attitudes and aspirations varied,- although grades were above average for all girls. Indeed, the issue of the class divide and the politics of such is a wide issue, one which will continue to trouble working class students, teachers, politicians and socialists until the biggest single contributing factor can be isolated. ...read more.