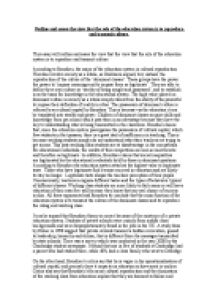 ﻿Outline and assess the view that the role of the education system is to reproduce and transmit culture. This essay will outline and asses the view that the view that the role of the education system is to reproduce and transmit culture. According to Bourdieu, the major of the education system is cultural reproduction. This does involve society as a whole, as Durkheim argued, but, instead, the reproduction of the culture of the ?dominant classes?. These groups have the power the power to ?impose meanings and to impose them as legitimate?. They are able to define there own culture as ?worthy of being sought and possessed?, and to establish is as the basis for knowledge in the educational system. The high value placed on dominant culture in society as a whole simply stems from the ability of the powerful to impose their definition of reality in other. The possession of dominant culture is referred to as cultural capital by Bourdieu. This is because via the education it can be translated into wealth and power. Children of dominant classes acquire skills and knowledge from pre-school which puts them in an advantage because they have the key to understanding what is being transmitted in the classroom. Bourdieu claims that, since the education system presupposes the possession of cultural capital, which few students in fact possess, there is a great deal of inefficiency in teaching. ...read more.

As a result the education system was creating and unimaginative and unquestioning workforce which could be easily manipulated by employers. Bowles and Gintis also believed that the hidden curriculum encourages an acceptance of hierarchy. Schools are organised on a hierarchical principle of authority and control. Students obey orders given to them by their teachers and they have little control over the subjects they study or how the study them. This prepares them for relationships within the workplace where, if workers are to stay out of, they will need to defer to the authority of supervisors and managers. At schools, students are taught to be motivated by extrinsic rewards which are the qualifications at the end of the process rather than intrinsic rewards which are enjoyment and interest in lessons. Lessons may involve dull exercises and worksheets. This prepares them for factory life which dull and repetitive. The wages are only thing that makes it worthwhile. Schoolwork is fragmented into different subjects. At the end of lessons students have to break off from unfinished tasks. Bowles and Gintis believe that in the factory the jobs have been broken down into very specific tasks carried out by separate individuals. In this way workers are denied knowledge of the overall productive process, which makes it impossible for them to set in competition with the employers. A fragmented and divided workforce is easier to control and it is easy to maintain this control because of the principle of divide and conquer. ...read more.

Bowles and Gintis (1976) argue that the major role of education in capitalist societies is the reproduction of labour power. According to them there is a ?close correspondence? between the workplace and the education system. Bowles and Gintis say that the major role of education is reproduce a docile, obedient and highly motivated workforce for the capitalist society. This workforce has to be divided and fragmented so it cannot challenge the authority of management. Bowles and Gintis can be criticised by saying that in Britain compulsory education was introduced long after the onset of industrialisation. Despite the fact that for a long time capitalists did not employ a workforce which had its attitudes and values shaped by education, the development of capitalism did not appear to be affected. Emile Durkheim was a French sociologist who said that the major function of education is the transmission of society?s norms and values. Durkheim can be criticized by saying that in recent decades both New Right and New Labour perspectives on education have tended to focus on the economic importance of education and have downplayed the significance of transmitting a shared culture. Paul Willis (1977) was a neo-Marxist who believed that the education system failed to manipulate the personality of the pupils and create the ideal worker. The Lads? also actively created their own subculture and voluntarily chose to look for manual jobs. This meant that education did not transmit culture to them and the ideal worker was not reproduced. ...read more.