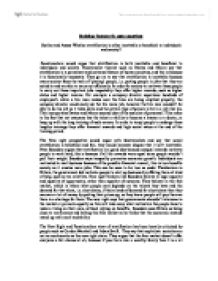 Outline and Assess Whether stratification is either inevitable or beneficial to individuals and society?

Sociology homework:-essay questions Outline and Assess Whether stratification is either inevitable or beneficial to individuals and society? Functionalism would argue that stratification is both inevitable and beneficial to individuals and society. Functionalist theorist such as Davies and Moore say that stratification is a permanent and universal feature of human societies, and this is because it is functionally necessary. They go on to say that stratification is inevitable because every society faces the task of 'placing' people, i.e. putting people in jobs that they are suited to and are able to carry out efficiently. In order for society to motivate these people to carry out these important jobs respectably they offer higher rewards, such as higher status and higher income. For example a company director supervises hundreds of employee's while a bin man makes sure the bins are being emptied properly, the company director could easily do the bin mans job, however the bin man wouldn't be able to do his job as it takes skills and the certain type of person to be in a job like his. This incorporates Davies and Moore second idea of the scarcity of personnel. This refers to the fact that not everyone has the talent or ability to become a lawyer or a doctor, or keep up with the long training of such careers. ...read more.

Karl Marx goes onto say that capitalism will be replaced by a communist society, where means of production are commonly owned. In evaluation of this we can see that this hasn't happened like Karl Marx predicted. However he goes on to say that this transition to communism will not be straightforward because it requires revolutionary action by the proletariat. This isn't going to be easy according to Marx as the bourgeoisie uses the media and education system to suppress the workers and to stop this from happening. They create false class consciousness i.e. the workers don't know that they are being exploited. Eventually though Marxists believe that class consciousness will develop and that workers will relies they are being exploited and will rise up and change society for the better i.e. getting rid of capitalism. Marx believes class consciousness will develop for several reasons. Firstly there is a basic contradiction in capitalist societies between the interests of the workers and the capitalists. Secondly Workers will be concentrated in large factories so the ruling class can exploit them even more, on the other hand this will make it easier for the workers to communicate with one another and to organize a resistance. Another reason class consciousness will develop is because the inequalities will become more obvious as the rich will be continually getting richer while the poor get poorer as their being exploited more. ...read more.

Pakulski and waters argue that people now exercise more choice about what type of people they want to be, i.e. gender, ethnicity, age and religion and family role interact and the impact with consumption and media images to construct post-modern culture and identity. The problem that can be seen with this theory is that it all sounds correct in theory however when it come to real life, it doesn't work out like this. This is because you can choose what type of person you want to be i.e. eating caviar for lunch and driving fast cars however all these thing cost money and so if you haven't got the money to do these things you cant live the lifestyle you want. Another criticism that Gordon Marshall points out is that post-modernists lack empirical evidence i.e. if they looked at the evidence they would see that in fact class is quite a potent force. Mike savage agrees with this and although he does think that traditional theories of class such as Marxism and Weber are outmoded he does believe that class remains massively important. In conclusion there are some points to suggest that stratification is inevitable such as functionalism and that it is beneficial such as functionalism and New right perspective . However there are also points from other theories that it isn't inevitable i.e. Marxists and Weber and that it doesn't benefit society i.e. Marxists. ...read more.