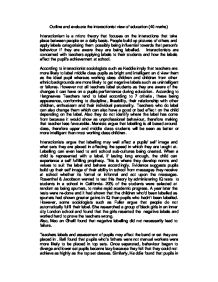 Outline and evaluate the interactionist view of education (40 marks)

Outline and evaluate the interactionist view of education (40 marks) Interactionism is a micro theory that focuses on the interactions that take place between people on a daily basis. People build up pictures of others and apply labels categorising them possibly being influential towards that person's behaviour if they are aware they are being labelled. Interactionists are concerned with teachers applying labels to their students and how the labels effect the pupil's achievement at school. According to interactionist sociologists such as Keddie imply that teachers are more likely to label middle class pupils as bright and intelligent and view them as the ideal pupil whereas working class children and children from other ethnic backgrounds are more likely to get negative labels such as unintelligent or failures. However not all teachers label students as they are aware of the changes it can have on a pupils performance during education. ...read more.

This is where they develop norms and values to suit the label and behave accordingly. Evidence suggests pupils build up their self image of their ability in school from messages they receive at school whether its formal or informal and act upon the messages. Rosenthal & Jacobson wanted to test this theory by administering IQ tests to students in a school in California. 20% of the students were selected at random as being spurters, to make rapid academic progress. A year later the tests were re-done and it had shown that the children who'd been labelled as spurters had shown greater gains in IQ than pupils who hadn't been labelled. However, some sociologists such as Fuller argue that people do not automatically fulfil their label. She researched a group of black girls in an inner city London school and found that the girls resented the negative labels and worked hard to prove the teachers wrong. ...read more.

Research shows that children in low ability groups may form anti-school subcultures because they cannot reach any academic goals the school wish for students to achieve so they reject them and replace them with their own deviant values. Hargreaves suggests that an emergence of subcultures is used as a way of achieving status and gaining attention, not necessarily positive attention either. Willis found that those in a subculture are not as a result of labelling, but as a rejection of the contract offered by the school. To support this Furlong suggests that pupils do not behave consistently in a subculture, thus conformist pupils may behave deviantly towards an easily influenced teacher. To conclude, Marxists argue that Interactionists do not explain where the labels come from. Mac an Ghaill states that Interactionists ignore other social characteristics such as ethnicity and social class. Also outside of school factors are ignored and are not taken into consideration when discussing views on education from an Interactionists point of view. ...read more.