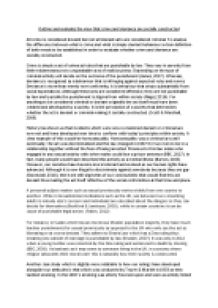 Transfer-Encoding: chunked ﻿Outline and evaluate the view that crime and deviance are socially constructed All crime is considered deviant but not all deviant acts are considered criminal. To analyse the difference between what is crime and what is simply deviant behaviour a clear definition of both needs to be established in order to evaluate whether crime and deviance are socially constructed. Crime is simply a set of universal rules that are punishable by law. They vary in severity from little misdemeanours to unspeakable acts of maliciousness. Depending on the type of criminal activity will decide on the outcome of the punishment (James, 2017). Whereas, deviance is recognised as a behaviour that is infringing against expected rules and norms. Deviance is more than merely non-conformity; it is behaviour that strays substantially from social expectations. Although these acts are considered offensive, they are not punishable by law and typically the punishment is stigma from within society (Nagel, 2016). For anything to be considered criminal or deviant originally the act itself must have been created and developed by a society. It is the perception of a society that determines whether the act is deviant or criminal making it socially constructed. ...read more.

As norms change so does legislation which then influences what we view as deviant behavior (Johnson, 1985). We now have regulations on the tobacco packaging to make them all standarised in the hope it deters future people from enrolling in this activity. (Nash, 2013) Marxism suggests that deviance is socially constructed as it means to stray from the ruling classes ideology since they control the means of production, and are therefore the intellectual rulers in society. They have the power to define working class activities as deviant, in doing so control them (Beirne, 1979). An example of this would be corporate collar crimes that go under the radar, as opposed to single mothers who are given harsher punishments in comparison to companies who commit tax fraud on such a large scale yet seem to ween through the system. ?The poor have criminal records, the middle class have skeletons in the closet and the rich have excellent accountants?. (Fogg, 2014) Howard Becker?s proposed the Labelling Theory and claimed that is not the act itself that is deviant; it is the response of society which defines it as such and, crucially, the responses of the powerful determine how society is expected to view such behaviours. ...read more.