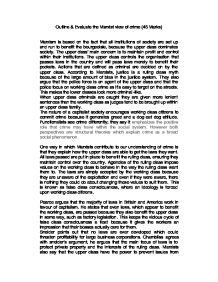 Outline & Evaluate the Marxist view of crime (45 Marks) Marxism is based on the fact that all institutions of society are set up and run to benefit the bourgeoisie, because the upper class dominates society. The upper class' main concern is to maintain profit and control within their institutions. The upper class controls the organisation that passes laws in the country and will pass laws merely to benefit their pockets. Actions that are defined as criminal are decided on by the upper class. According to Marxists, justice is a ruling class myth because of the large amount of bias in the justice system. They also argue that the police force is an agent of the upper class and that the police focus on working class crime as it's easy to target on the streets. This makes the lower classes look more criminal-like. When upper class criminals are caught they are given more lenient sentences than the working class as judges tend to be brought up within an upper class family. The nature of a capitalist society encourages working class citizens to commit crime because it generates greed and a dog eat dog attitude. ...read more.

Laws are also passed which do have an affect on the higher classes, otherwise too many crimes like fraud would be carried out and left alone so that corporate and white collar crime would spiral out of control and our society would not benefit from this. Functionalists look at crime differently and say that our society is run using a value consensus, where rules are not imposed but everyone has a general agreement on what is right on wrong. Another way in which Marxists contribute to our understanding of crime is by explaining how the upper class controls the criminal justice system. All classes in the hierarchy commit crime yet the working class are more likely to be caught and punished due to working class crimes such as burglary and drug offences tend to take place in the public domain and are easier to police. The police also tend to focus on working class areas as the official statistics suggest that the working class commit more crime than any other class. Sutherland argues that white collar crimes and corporate crimes tend to go unnoticed as these crimes are never committed within the public domain. ...read more.

Crime is seen as a rational response to breakdown in a capitalist society. Crime is not an activity that is only seen in a capitalist type of society, communistic run governments will also experience crime. Switzerland is also a capitalist society yet experiences one of the lowest crime rates in the world. Neo Marxists accuse Marxists of economic determinism, arguing that human behaviour is determined by the economic system, plus ignoring the ability of humans making rational choices, determining their own fate. Also, many working class citizens do not commit crime; they go about life using legitimate means. Marxists tend to focus on the link between crime and class, yet they ignore influences such as ethnicity and gender. The Marxist view of crime has been very influential and highlights some important issues present in the criminal justice system. It is difficult to criticise the Marxist perspective of crime, as a lot of it can be explained by false class consciousness. However, it has been criticised as being a one sided debate and ignored other social variables that are relevant and should be included. The Marxist view also tends to ignore real causes and damage. The Marxist perspective of crime is still useful as class is still relevant in today's society and reveals that middle class crime may be largely underestimated. ...read more.