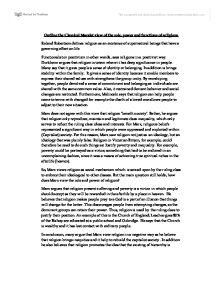 Roland Robertson defines religion as an existence of supernatural beings that have a governing effect on life.

Functionalist or positivism in other words, sees religions in a positivist way. Durkheim argues that religion is totem where it has deep significance in people. Many say that it gives people a sense of identity or belonging. In addition is brings stability within the family.  It gives a sense of identity because it enable members to express their shared values with strengthens the group unity. By worshiping together, people devolved a sense of commitment and belonging as individuals are shared with the same common value. Also, it restrained deviant behavior and social changes are restricted. Furthermore, Malinoski says that religion can help people come to terms with changed for example the death of a loved one allows people to adjust to their new situation.

Marx does not agree with this view that religion ‘benefit society’. Rather, he argues that religion only reproduce, maintain and legitimate class inequality, which only serves to reflect the ruling class ideas and interests. For Marx, religious beliefs represented a significant way in which people were oppressed and exploited within (Capitalist) society. For this reason, Marx saw religion not just as an ideology, but an ideology that was plainly false. Religion in Victorian Britain, for example, could therefore be used to do such things as: Justify poverty and inequality. For example, poverty could be portrayed as a virtue; something that had to be endured in an uncomplaining fashion, since it was a means of achieving true spiritual riches in the afterlife (heaven).

So, Marx views religion as social mechanism which is seized upon by the ruling class to enforce their ideological to other classes. But the main question still holds, how does Marx view the role and power of religion?

Marx argues that religion present suffering and poverty is a virtue in which people should accept as they will be rewarded in the afterlife by a place in heaven.  He believes that religion makes people pray to a God is a part of an illusion that things will change for the better. This discourages people from attempting changes, so the dominant groups can retain their power. Thus, religion is used by the ruling class to justify their position. An example of this is the Church of England; Leach argues 80% of the Bishop are educated at a public school and Oxbridge. He says that the Church is wealthy and it has lost contact with ordinary people.

In conclusion, many argue that Marx view religion in a negative way as he believe that religion brings inequities and it help to rebuild the capitalist society. In addition he also believes that religion promotes the idea that the existing of hierarchy is natural and god-given in which the ruling class can exploits the working class with their ideas and interests.