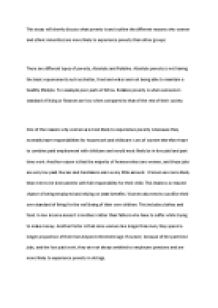 ﻿This essay will shortly discuss what poverty is and outline the different reasons why women and ethnic minorities are more likely to experience poverty than other groups. There are different types of poverty, Absolute and Relative. Absolute poverty is not having the basic requirements such as shelter, food and water and not being able to maintain a healthy lifestyle. For example poor parts of Africa. Relative poverty is when someone?s standard of living or finances are low when compared to that of the rest of their society. One of the reasons why women are most likely to experience poverty is because they normally have responsibilities for housework and childcare. ...read more.

Women also tend to sacrifice their own standard of living for the well being of their own children. This includes clothes and food. In low income areas it is mothers rather than fathers who have to suffer while trying to make money. Another factor is that since women live longer than men, they spend a longer proportion of their lives beyond retirement age. However, because of the part time jobs, and the low paid work, they are not always entitled to employers pensions and are more likely to experience poverty in old age. Some of the reasons ethnic minorities experience poverty are due to language and literacy barriers, racism, and prejudice within society. ...read more.

The problem also goes beyond employment opportunities, but also affects wages, as it is found that Bangladeshi and Pakistani men are paid worse on average than all other ethnicities. This shows that discrimination and racism against ethnic minorities is one of the key reasons that they are more likely to experience poverty, even if they have made an effort to break out of the poverty cycle, simply because they will be disadvantaged when trying to access many opportunities. In conclusion, the main reasons why women are in poverty are because they have to look after children which affects their ability to work in a paid job. Ethnic minorities encounter racism in the workplace and are therefore more likely to lie in poverty. ...read more.