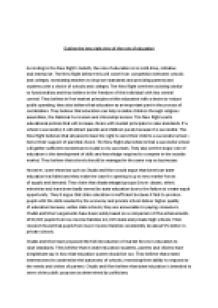 Outline the new right view of the role of education

﻿Outline the new right view of the role of education According to the New Right?s beliefs, the role of education is to instil drive, initiative and enterprise. The New Right believe this will come from competition between schools and colleges, motivating teachers to improve standards and providing parents and students with a choice of schools and colleges. The New Right see them as being similar to functionalists and they believe in the freedom of the individual with less central control. They believe in free market principles within education with a desire to reduce public spending, they also believe that education as an important part in the process of socialisation. They believe that education can help socialise children through religious assemblies, the National Curriculum and citizenship lessons. ...read more.

They claim that disadvantaged groups (lower classes, ethnic minorities ect) have been badly served by state education due to the failure to create equal opportunity. They?d argue that state education is inefficient because it fails to produce pupils with the skills needed by the economy and private school deliver higher quality of education because, unlike state schools, they are answerable to paying consumers. Chubb and Moe?s arguments have been solely based on a comparison of the achievements of 60,000 pupils from low income families in 1,015 state and private high schools. Their research found that pupils from lower income families consistently do about 5% better in private schools. Chubb and Moe have proposed the full introduction of market forces in education to raise standards. ...read more.

That school VS competition is partially dangerous as it means that schools may focus and spend more money on marketing rather than investing in resources for its pupils. And that through selection by schools, in an open market schools select their pupils in an attempt to cream off the most able with the result that some schools get the most able pupils and are held in high regard while other ?sink? schools get the least able and are guaranteed poor exam results. This cements in the public?s mind that they are failing schools that no parent would want to voluntarily send their child to. Such schools then get caught in a vicious circle as they do not get any able children attending them and have no way of improving their public rating via exam results and are almost doomed to a critical Ofsted report with a corresponding poor position in school league tables. ...read more.