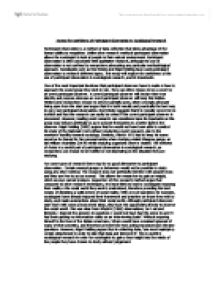 With pre-set questions for example, sociologists have already imposed their framework and priorities on those they wish to study, and made assumptions about their social world. Although participant observers start work with some preconceived ideas, they have the opportunity directly to observe the social world. This was clear from Whyte's [1955] observations, 'as I sat and listened, I learned the answers to questions I would not have had the sense to ask if I had been getting my information solely on an interviewing basis'. Without exposing himself to the lives of the Italian Americans, Whyte would have remained ignorant of many of their priorities, and therefore prevent him from asking important and relevant questions. However, Nigel Fielding argues that in collecting data, 'one must maintain a certain detachment in order to take that data and interpret it'. This is useful in sociological research in order for sociologists to gain a true insight into the minds of the people they have chosen to study without judgement. ...read more.

Cicourel also admits that his participant observation study relied heavily upon his own observational and interpretive skills. Positivists may criticise participant observation also on the grounds that it cannot be replicated, and it being too unscientific. Being unable to replicate a study can have some serious drawbacks in sociological research as they results cannot be checked, and are therefore less likely to be believed as results gained from other studies which can be replicated. In conclusion, participant observation has shown to be a useful form of sociological research, as it can be used to gain a first hand view into various issues. Sociologists have the opportunity to look at situations without imposing their own assumptions on them to produce true data. However, the drawbacks are not to be taken lightly. The lack of reliability and representativeness does not encourage others to take the research seriously, as does the problem of not being able to replicate the study. Participant observation therefore would possibly need to be backed up with quantitative information from secondary data such as official statistics to make generalisations and identify trends and patterns to reach a more objective conclusion. ...read more.