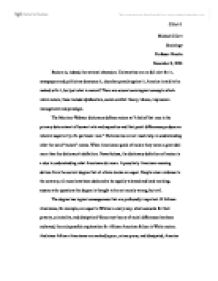 Racism is, indeed, the national obsession. Universities are on full alert for it, newspapers and politicians denounce it, churches preach against it, America is said to be racked with it, but just what is racism? There are several sociological concepts which relate racism; these include dysfunction, social conflict theory, taboos, impression management and paradigm.

The Merriam-Webster dictionary defines racism as "a belief that race is the primary determinant of human traits and capacities and that racial differences produce an inherent superiority of a particular race.” Dictionaries are not much help in understanding what the word “racism” means. When Americans speak of racism they mean a great deal more than the dictionary’s definition. Nevertheless, the dictionary definition of racism is a clue to understanding what Americans do mean. A peculiarly American meaning derives from the current dogma that all ethnic stocks are equal. Despite clear evidence to the contrary, all races have been declared to be equally talented and hard-working; anyone who questions the dogma is thought to be not merely wrong, but evil.

The dogma has logical consequences that are profoundly important. If African Americans, for example, are equal to Whites in every way, what accounts for their poverty, criminality, and dissipation? Since any theory of racial differences has been outlawed, the only possible explanation for African American failure is White racism. And since African Americans are markedly poor, crime-prone, and dissipated, America must be racked with pervasive racism. Nothing else could be keeping them in such an abject state. This idea that African Americans are destined to failure applies to the concept of dysfunction. Dysfunction is the theory that socities and certain situations with in societies produce unwanted outcomes. There are certain situations, such as White racism, that create the unwanted outcome of African American failure.

All public discourse on race today is locked into this rigid logic. Any explanation for African American failure that does not depend on White wickedness threatens to veer off into the forbidden territory of racial differences. Thus, even if today's Whites can find in their hearts no desire to oppress African Americans, yesterday's Whites must have oppressed them. If Whites do not consciously oppress African Americans, they will oppress them unconsciously. If no obviously racist individuals can be identified, then societal institutions must be racist. Sociologist would categorize this perception of a racist society into conflict theory. This is the idea that societies while encouraging change can also generate conflict. The dogma of racial equality leaves little room for an explanation of African American failure that is not, in some fashion, an indictment of White people. A current example of this is the comedian Michael Richards, while performing at a comedy club in West Los Angles two African American audience members were heckling him during his performance. Richards in retaliation began ranting and calling them the “n-word.” Our society encourages the belief that all races are equal, giving the perception to many White people that words such as the “n-word” carry no severe racial meaning.

Our societies encouragement that all races are equal on the outside and ignoring that racial tension does indeed exist contributes to the sociological idea of impression management. There are two parts of impression management: one is a public self, in which a person acts a certain way in public; the second is the personal self, this is how the person acts in private. The two selves do not always agree. Richards is a perfect example of this concept, to the public Richards is a famous well like comedian from Seinfeld. However, his personal self (which became quite apparent during his comedy show) is an angry racist.                                                                        I do not see myself as a racist whatsoever, but feel that everyone no matter their race or how much they say that they are not in anyway racist harbors some kind of racism due to the media. The media, I feel, plants racist notions into the minds of the public. As hard as it is to admit, all people see color. Just because a person does not directly act racist in the traditional sense of the word, for example calling an African American by the name that we dare not speak aloud (the “n-word”), it may be buried deep within the person.         The use of the “n-word” for African Americans or the word “chink” for Chinese people are examples of taboos with in our society. Taboo is defined as a violation of social norms that should not be thought of or used. This concept of taboos is what made Richard’s comment is what created such media frenzy- a white man, famous none the less, publicly used a racial slur. It relates back to impression management, if Richards had used such language in his home, personal life, no big fuss would have been made. However, Richards crossed the racial line when he publicly showed his true feelings.

The answer to racism therefore, is for individuals to form open ended Paradigms, which support what is called a Paradigm Shift, which is what occurs when a person come to the realization that their current Paradigm is inadequate and/or inaccurate and they revise it by finally accepting and incorporating new information which had been previous ignored, or gone unrecognized. Everyone forms associations in their mind, it's unavoidable since that is partially how our minds function. Everyone builds Paradigms from these associations.