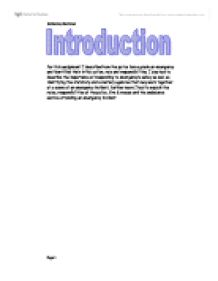 For this assignment I described how the police force grade an emergency and identified their initial action, role and responsibilities. I also had to describe the importance of responding to emergency's safely as well as identifying the statutory and voluntary agencies that may work together at a scene of an emergency incident, further more I had to explain the roles, responsibilities of the police, fire & rescue and the ambulance service attending an emergency incident P1 According to the Civil Contingencies Act 2004 an emergency in the UK is defined as any event or situation which threatens damage to human welfare, the environment, or to the security of the United Kingdom. To be defined as an emergency, an event must also require response by the emergency services, hospitals or local authority to put in to place special arrangements. Emergencies can therefore come in a number of forms, whether natural or human caused, challenge the normal delivery of emergency service, and have the potential to lead to loss of life. ...read more.

work at a scene of an emergency incident are; * St johns ambulance * Mountain rescue * Salvation army * Red cross * Women's institute * RNLI * Air ambulance (Cumbria) Not all of these agencies will respond to emergencies and not every town or city will have all of them but they do have to have a fire and rescue service along with a police service and an ambulance service. M1 The roles and responsibilities of the key Services attending an emergency incident are; Police * Prevent crime * Support the community & other services * Arrest and charge people. * Enforce the law. * Cordon off places. Ambulance * Help injured people * Assist accidents and emergencies * Save people lives * Patient transfer * Support the other services * Respond to disasters * First aid * Initial treatment of casualties Fire service * Fire fighting * Accident prevention * Protect life and property * Environmental protection * Rescue service ?? ?? ?? ?? Kimberley Mortimer Page 1 ...read more.