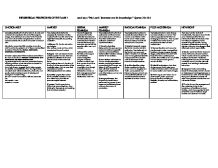 FUNCTIONALIST MARXIST LIBERAL FEMINISM MARXIST FEMINISM RADICAL FEMINISM POST-MODERNISM NEW RIGHT They believe that the family is functional, it works and is universal. It is needed as it is part of the organic analogy. They believe, the nuclear family transmits norms and values to the next generation order to produce consensus thus culture of society and social order. 1) Murdoch- researched 250 countries across the world found family existed in all of them. He identified 4 functions of the family. SEXUAL, EDUCATION, ECONOMIC, REPRODUCTIVE. 2) Parsons- researched white middle class families in USA. Found 2 functions. PRIMARY SOCIALISTION AND STABILISATION OF ADULT PERSONALITIES. -Argues that the family acts as a personality factory, producing children whose behaviour is shaped by individualism and achievement. -Warm bath theory- suggests family helps parents gain stability and satisfaction from having children and sustain each other emotionally, physically, and sexually. It also provides means of relaxing and relaxing from modern living. Men and women have clearly defined, separate roles. ...read more.

Even though most divorces are initiated by women, in fact most get remarried shows they do want relationships with men. They believe that the family is patriarchal and that women are a reserve army of labour. Also, they believe that patriarchy arises from capitalist relations. 1) Veronica Beechey- believes that housewives carry out two functions. To provide care for current and future workers other is to be a cheap reserve of army labour. 2) Fran ainsley- believes that women are the expressive leaders, providing emotional support and that "women are takers of shit" because they deal with their husbands anger and frustration from work. She believes women are oppressed. 3) Margaret benston- the amount of unpaid labour performed by women is very large and profitable to those who own the means of production. They believe that patriarchy leads to the subordination of women and children in the home and in wider society. Rape and sexual assault are example of male power. ...read more.

Their view is similar to that of functionalists. They see nuclear family as an ideal type of family and intolerant of other family types. They have the connotations of lone parents living off benefits, having short term-relationships and having children with men who disregard their offspring's as their responsibility. 1) Dennis- examined family type and crime. He found out social control which was examined by past family traditions have been weakened. Claiming that boys do not have role models to copy in families with split parents, thus resulting in delinquent behaviour. 2) Rapoport- family are building blocks for the society. Family is based on heterosexual marriage between a husband and a wife. A family require strong and disciplined parents. All other arrangements are deviant and a threat to society. 3) Charles Murray- the emergence of the underclass is due to the breakdown of traditional nuclear families, which have resulted in birth of children out of wedlock, single families and decline in morality. ?? ?? ?? ?? THEORRETICAL PERSPECTIVES OF THE FAMILY and say: "My Lord! Increase me in knowledge." Quran 20:114 ...read more.