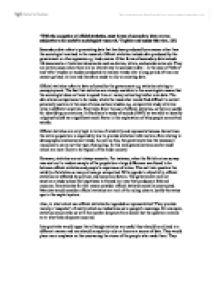 'With the exception of official statistics, most forms of secondary data are too subjective to be useful in sociological research.' Explain and assess this view. [25] Secondary data refers to preexisting data that has been produced by someone other than the sociologist involved in the research. Official statistics include data produced by the government or other agencies e.g. trade unions. Other forms of secondary data include life documents or historical documents such as diaries, letters, and suicide notes etc. They are certain cases when there are no alternatives to secondary data - in the case of 'before' and 'after' studies or studies conducted to analyze trends over a long period of time one cannot go back in time and therefore needs to rely on existing data. Official statistics refers to data collected by the government e.g. statistics relating to unemployment. The fact that statistics are already available to the sociologists means that the sociologist does not have to spend time or money collecting his/her own data. The data allows comparisons to be made, which the researcher would find difficult to collect personally such as in the case of cross cultural studies e.g. ...read more.

Interationists for that reason consider official statistics socially constructed. Marxists would consider official statistics as a tool of the ruling class to justify the status quo in the capital system. Also, to what extent can official statistics be regarded as representative? They provide merely a 'snapshot' of reality which no indications as to people's meanings. For example, statistics can provide us with the number dropouts from school but the question remains as to why these dropouts occurred. Interpretivists would argue that although statistics are useful they should be utilized in a different manner and one should completely rely on them as a source of data. They would place more emphasis on the uncovering the views of the people who made them. They tend to favor data sources, which could be seen as important for allowing 'verstehen' a German word, which means the understanding of human activity. Interpretivists consider life documents useful in revealing personal meanings, which they see as shaping behavior. Life documents are a secondary source that involve the expression of feelings e.g. diaries, letters, emails and blogs. ...read more.

However, this may be difficult, as certain documents may have deteriorated over time. Also, asking four key questions should assess the reliability and validity of any historical document - How authentic it is? Does it have credibility? Is the document representative? And do we share the author's interpretations? Mass media reports such as newspapers etc may also be used as a secondary source of data but these too are often 'too subjective' as they largely reflect the views of journalists or those who created them. They have also been criticized for distorting images of society. All in all, official statistics are useful, however, they are often questioned in terms of validity. It could be argued that it would be a better use of the sociologist's time to not completely rely on official statistic but perhaps to use them in comparison with the findings of primary data. For instance is the trend uncovered by primary research typical of the wider society? In the case of say, demographics, official statistics are vital however, other secondary sources can provide data more an insight into people's subjective states. Perhaps a combination (known as methodological pluralism) can be used to balance out the research in terms of objectivity and subjectivity. ...read more.

Overall this is a good essay that covers reliability, representation and validity and some good key studies. There is both advantages and disadvantages but a little more on the advantage side would balance up the essay. Also, a little more focus and explanation of subjectivity is required. Overall: ****