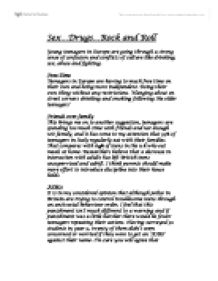 Young teenagers in Europe are going through a strong sense of confusion and conflicts of culture like drinking, sex, abuse and fighting.

Teenagers in Europe are having to much free time on their own and being more independent. Doing their own thing without any restrictions. ‘Hanging about on street corners drinking and smoking following the older teenagers’

This brings me on to another suggestion, teenagers are spending too much time with friends and not enough wit family, and it has come to my attention that 93% of teenagers in Italy regularly eat with their families. That compares with 64% of teens in the u.k who eat meals at home. Researchers believe that a decrease in interaction with adults has left British teens unsupervised and adrift. I think parents should make more effort to introduce discipline into their house holds.

It is in my considered opinion that although police in Britain are trying to control troublesome teens through an anti-social behaviour order, I feel that this punishment isn’t much different to a warning and if punishment was a little harsher there would be fewer teenagers repeating their actions. Having surveyed 30 students in year 9, twenty of them didn’t seem concerned or worried if they were to get an ‘ASBO’ against their name. I’m sure you will agree that something more severe like community service at weekends would have a bigger affect as it is taking them off the streets giving them less free time to repeat their actions.

You must have heard about the tragic story in the local newspaper about Sarah loos. How she went meeting her friends or people she thought where her friend and was coaxed to local secluded park and being set upon around 15 youths and if it hadn’t been for one member of the gang who rang for an ambulance she may not have been alive today. This is a perfect example of an unprovoked attack on an innocent girl by youths who call this normal Friday night fun. Do you call this fun? Poor Sarah has to carry this horrific memory for the rest of her life and the gang is still walking free due to the fact that she was to afraid to mention any names for fear of her life. Furthermore, im sure you will agree if she had been brave enough to mention anyone she had recognised that night it could prevent an attack on another innocent victim!

Adults must start listening to the viewpoints of teenagers as well as taking control of them. Before the situation gets any worse and teenagers take over the streets of Britain. A large Percentage of teenagers are angry, aggressive and out of control something needs to happen. Let’s make the change now!