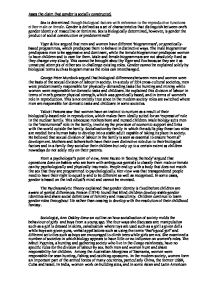 Sex is biologically determined, however, is gender the product of social construction or predetermined?

Asses the claim that gender is socially constructed. Sex is determined though biological factors with reference to the reproductive functions either male or female. Gender is defined as a set of characteristics that distinguish between one's gender identity of masculine or feminine. Sex is biologically determined, however, is gender the product of social construction or predetermined? Tiger & Fox argued that men and women have different 'biogrammars', or genetically-based programmes, which predispose them to behave in distinctive ways. The male biogrammar predisposes men to be aggressive and dominant, while the female biogrammar predispose women to have children and to care for them. Male and female biogrammars are not absolutely fixed as they change very slowly. This cannot be brought about by Tiger and Fox because they see it as unnatural attempts of either sex to challenge existing roles. Gender cannot be explained solely by biological terms such as biogrammar as the roles can interchanged. George Peter Murdock argued that biological differences between men and women were the basis of the sexual division of labour in society. In a study of 224 cross-cultural societies, men were predominantly responsible for physically-demanding tasks like hunting and mining while women were responsible for domestic tasks and childcare. ...read more.

Children continue to learn gender roles throughout life rather than ceasing to develop with the resolution of their childhood fantasy. Sociologist, Ann Oakley drew an outline on how socialization of society molds the behaviour of girls and boys from a young age. The four ways she discusses are: manipulation such as a girl is dressed in skirts, canalization where toys are used such as a girl is given dolls while boys are given guns, verbal appellations such as using the terms 'that's good girl' and different activities such as boys are encouraged to climb trees while girls are not. She examined a number of societies in which biology appears to have little or no influence on women's roles. The Mbuti Pygmies, a hunting and gathering society who live in the Congo rainforests, have no specific rules for the division of labour by sex. Both men and women hunt and share responsibility for children. Among the Australian Aborgines of Tasmania, women were responsible for sean hunting, fishing and catching opossums. In the modern society, women form an important part of the armed forces of many countries, particularly China, the former USSR, Cuba and Israel. In India, women work on building sites, and in some Asian and Latin American countries, they work in mines Gender identity is not based on biological factors, but is instead a choice which is affected by socialization. ...read more.

Kessler and McKenna argued that even the most basic division, between male and female can be seen as being a part of social construct. According to functionalism, human behavior is the product of shared norms and values known as collective conscience. Gender is thaught and leaned through the views of society. Males are expected to be heroic while females are expected to be polite and gentle. This is done through social sanctions which are punishment and rewards. Boys who climb trees would be praised for being adventurous but girls who do the same would be labeled as naughty. Through marketing schemes, children are genderly constructed. For example, happy meal provided in Mc Donalds has two sets, one proposed for boys such as action figures while the other set is aimed for girls such as Barbie doll merchandises. Dress codes, language, behavior, language, games, work, career, activities differ with both men and women and also throughout societies and cultures. Although sex is ascribed which is biologically determined. Gender is socially constructed in the sense that differences in the behavior of males and females are learned rather than being the inevitable result of biology. Gender is largely socially constructed as the sex of children merely provides a guide on which ways a child should be socialized. Expected since birth, a girl is expected to behave politely. ...read more.