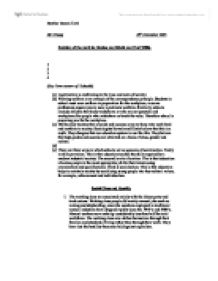 Social Class and Identity 1. The working class are associated mainly with the labour party and trade unions

Mrs Young 28th December 2005 Revision of the work by Bowles and Gintis and Paul Willis. 1 2 3 4 (Key Term unsure of: Eclectic) (a) Legitimation is conforming to the laws and rules of society. (b) Wearing uniform is an example of the correspondence principle. Students in school must wear uniform in preparation for the workplace, as some professions require you to wear a particular uniform. Similarly, schools exclude children that badly misbehave or who are not punctual and workplaces fire people who misbehave or break the rules. Therefore school is preparing you for the workplace. (c) Meritocracy teaches that rewards and success come to those who work hard and conform to society. Sociologists Bowels and Gintis believe that this is a myth. They disagree that our education system is run like this. They believe that high grades and success are achieved on a basis of class, gender and culture. ...read more.

They have lost the hostility they once held against capitalism. 2. These are typical working class people; shown here in the soap drama 'Eastenders,' running a market stall. 3. The underclass are different from the working class because they rely on state benefit as their means of financial income. The working class mainly have job security as they do the jobs that are vital to maintain society. Saunders describes the underclass as those who are in badly paid or casual jobs, the unemployed, and single parents. Saunders suggests that the culture and identity of this underclass revolve around being work-shy and dependant on the welfare benefits provided by the state. Not all sociologists believe that there is an underclass. Jordan suggests that those living in poverty have the same views about work and family as everyone else. Research has shown that the poor often feel shame and guilt about having to ask others for help, it is a loss of their dignity. ...read more.

On the other hand, surveys of clerical workers indicated that they see themselves as Middle Class as they rarely mix with manual workers and spend their leisure time and money in quite different ways. 8. According to Mackintosh and Mooney it is hard to identify the upper class. They said ' wealth and privilege are not very visible.' They suggested that we can identify the upper class mainly by how powerful in society they are. 9. Children born into the upper class learn distinct ways of speaking, mannerisms, attitudes, values and ways of seeing the world that clearly distinguish them from other classes. They learn that they have security, control, and power over the lives of others. This lifestyle results in self-confidence and a sense of social superiority. 10. 11. The upper class practices social closure, it is self recruiting in that entry to the class is not the result of merit. Entry is restricted to those with a social background deemed 'worthy' by the upper class. 12. ?? ?? ?? ?? Heather Dennis 12AI ...read more.