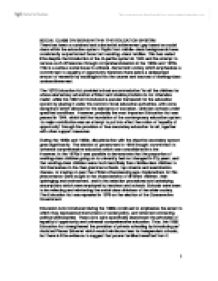 SOCIAL CLASS DIVISIONS WITHIN THE EDUCATION SYSTEM. There has been a sustained and substantial achievement gap based on social class within the education system. Pupils from middle- class backgrounds have consistently outperformed those form working -class families. This has varied little despite the introduction of the tri-partite system in 1944 and the attempt to remove such differences through comprehensivisation in the 1960s and 1970s. This is a serious social issue in a liberal, democratic society which emphasises a commitment to equality of opportunity therefore there exists a widespread amount of research by sociologists into the causes and sources of working-class underachievement. The 1870 Education Act provided school accommodation 'for all the children for whose elementary education efficient and sizable provision is not otherwise made', while the 1902 Act introduced a secular framework for the education system by placing it under the control of local education authorities, with some exceptions which allowed for the existence of sectarian, Christian schools under specified conditions. However, probably the most important Education Act was passed in 1944, which laid the foundation of the contemporary education system. Its major contribution was an attempt to put into effect the notion of 'equality of opportunity' through the provision of free secondary education for all, together with other support measures. During the 1950s and 1960s, dissatisfaction with the tripartite secondary system grew significantly. The election of government in 1964 brought commitment to universal comprehensive education which was consolidated into the However, in the 1970s it was possible to demonstrate that the proportion of working-class children going on to university had not changed in fifty years, and that working-class children were much less ...read more.

Rather it the product of entering an educational system shaped and dominated by the culture of the capitalist class. Bourdieu notes that dominant classes are able to define what is defined as knowledge and culture and this is enshrined within the educational system. Moreover they are able to define the knowledge and culture of subordinate groups such as the working-class as less worthy of attention and study. Bourdieu refers to this as 'symbolic violence'. The children of the dominant classes come to school equipped with 'cultural capital'; they subscribe to values, norms, experiences, linguistic skills and forms of knowledge, which fit into the ruling class ethos of the school. This cultural capital is the product of their home environment in which their daily experience results in them internalising particular ways of thinking which come to be taken-for-granted such as going to university one day. Such children normally achieve their educational goals especially as their parents can also offer material supports such as paying for extras such as books, courses, trips, or private education. The children of the working-classes, on the other hand, experience a 'cultural deficit'; they soon realise that the school and teachers attach little value to their experiences and values. In order to succeed, such children have to rapidly acquire the sorts of skills associated with cultural capital. Most fail to do this and are alienated by the middle-class nature of schooling. Such pupils often come into conflict with the school and end up either losing interest or eliminating themselves or, are eliminated by public examinations. ...read more.

In particular they have provided a very useful focus on classroom interaction and we have a much better understanding of the processes of labelling and negotiation, which take place between teachers and pupils. This focus on the way meanings are constructed through classroom interaction offers another perspective on education in addition to the structuralist concerns with the social role and function of education. The weaknesses of the Interpretivist approach lie primarily in its failure to fully recognise the way external social structures influence the meanings negotiated in the classroom. Those approaches which attempt to relate classroom interaction to the wider social structure have their own difficulties but offer a useful way to apply the strengths of an Interpretivist approach. In considering most of the evidence presented by sociologists, it is clear that a two-tier system of education exists, in which those parents with economic resources and appropriate cultural capital can ensure that their children get the best possible start in life. Parents who are less well informed, lacking in social power or merely poor have little choice other than to send their children to the nearest school ; always supposing that the school is prepared to accept them. In schools in which children come from poor homes, in areas of multiple deprivation and poverty it is highly unlikely that the test and examination results will compare favourably with those of more privileged schools. The morale of pupils and teachers in such schools has deteriorated, making them increasingly difficult to manage. As long as these issues continue to exist the present school system reinforces social class divisions among our children of the future. 1 ...read more.