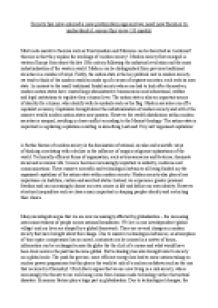 Society has now entered a new post-modern age and we need new theories to understand it, assess this view

﻿Society has now entered a new postmodern age and we need new theories to understand it, assess this view (33 marks) Most meta-narrative theories such as Functionalism and Marxism can be described as 'modernist' theories in that they explain the workings of 'modern society'. Modern society first emerged in western Europe from about the late 18th century following the industrial revolution and the mass industrialisation of the western world. Modern can be distinguished from previous traditional societies in a number of ways. Firstly, the nation-state is the key political unit in modern society, we tend to think of the modern world as made up of a series of separate societies, each with its own state. In contrast to the small traditional feudal society where one had to look after themselves, modern nation states have created large administrative bureaucracies and educational, welfare and legal institutions to regulate their citizens lives. ...read more.

Modern society also places less importance on tradition, custom and ascribed status. Instead, we experience greater personal freedom and can increasingly choose our own course in life and define our own identity. However structural inequalities such as class remain important in shaping peoples identity and restricting their choice. Many sociologists argue that we are now increasingly affected by globalisation ? the increasing interconnectedness of people across national boundaries. We live in one interdependent 'global village' and our lives are shaped by a global framework. There are several changes in modern society that have brought about this change. Due to massive technological advances, an atmosphere of 'time-space compression' has occurred; continents can be crossed in a matter of hours, information can be exchanged across the globe the the click of a mouse and what would have been local news in the past has become global. ...read more.

Some sociologists claim that globalisation has undermined the power of the nation-state. For example Ohmae argues that we now live in a border less world in which trans-national corporations and consumers have more economic than national governments. States are now less able to regulate the activities of large capitalist enterprises, a situation Lash and Urry describe as 'disorganised capitalism'. Due to the role of information and communications technology, especially the mass media, it has become harder for cultures to exist in isolation from one another as globalisation increases. Instead of separate isolated cultures, we find ourselves living in a global culture in which western owned companies spread western culture to the rest of the world. In addition, the increased movement of people as tourists, economic migrants, refugees and asylum seekers helps to create globalised culture. Globalisation also undermines traditional sources of identity such as class. For example, the shift of manufacturing from the west to developing countries has led to the fragmentation and decline of working class communities that previously gave people their class identity. ...read more.