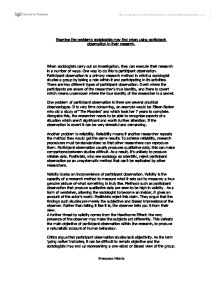 Examine the problems sociologists may find when using participant observation in their research.

As a form of verstehen, allowing the sociologist to become an insider, it gives an account of the actor's world. Positivists reject this claim. They argue that the findings such studies are merely the subjective and biased impressions of the observer. Rather than telling it like it is, the observer tells you it from their view. A further threat to validity comes from the Hawthorne Effect: the very presence of the observer may make the subjects act differently. This defeats the main objective of participant observation within the research, to produce a naturalistic account of human behaviour. Critics argue that participant observation studies lack objectivity. As the term 'going native' indicates, it can be difficult to remain objective and the sociologists may end up representing a one-sided or biased view of the group. Sometimes loyalty to the group or fear of reprisals leads the sociologist to conceal 'sensitive' information. ...read more.

In practical terms, getting out the group at the end of the study can present a few problems, but less than gaining entry or staying in the group. If the worst comes to the worst, the researcher can just call a halt and leave. This is the experience James Patrick had to do when he was sickened by the violence, he neglected the study immediately. Something James Patrick discovered whilst part of the gang is that he can not make notes freely and must memorise them until there's a time when he can write them down. The researcher can not ask naive but important questions, or combine observation with other methods, such as interviews. Although pretending to be an insider rather than an outsider reduces the risk of the Hawthorne Effect, the addition of a new member (the researcher) can still change the group's behaviour, consequently reducing validity. In conclusion, I have found there are many problems relating to participant observation, but would need to compare them with the advantages of participant observation. Francesca Morris ...read more.