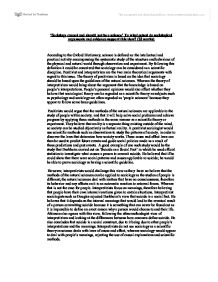 Sociology cannot and should not be a science To what extent do sociological arguments and evidence support this view?

'Sociology cannot and should not be a science' To what extent do sociological arguments and evidence support this view? (33 marks) According to the Oxford Dictionary, science is defined as: the intellectual and practical activity encompassing the systematic study of the structure and behaviour of the physical and natural world through observation and experiment. By following this definition it could be conceived that sociology can be considered as a scientific discipline. Positivist and interpretivism are the two main theoretical arguments with regard to this issue. The theory of positivism is based on the idea that sociology should be based upon the guidelines of the natural sciences. Whereas the theory of interpretivism would bring about the argument that the knowledge is based on people's interpretations. People's personal opinions would also affect whether they believe that sociological theory can be regarded as a scientific theory as subjects such as psychology and sociology are often regarded as 'people sciences' because they appear to follow some basic guidelines. Positivists would argue that the methods of the natural sciences are applicable to the study of people within society, and that it will help solve social problems and achieve progress by applying these methods in the same manner as a scientific theory or experiment. ...read more.

Interpretivists do not see sociology as a scientific theory as science deals with laws of cause and effect, whereas sociology would appear to deal with people's meanings, rejecting the use of casual explanations and scientific methods. When it comes to conducting research interpretivists are more likely to use qualitative data such as personal documents and analysis. For example when the issue of suicide arises, they would require evidence of a suicide note. However, positivists prefer to use quantitative data, such as official statics. So when suicide is considered it cannot be defined as a social fact because people attach their own meanings to make sense of it, which is internal to their consciousness. Because of this social factors may not be applicable to a person's death, as the deceased will have their own personal reasons for the taking of their own life. Overall interpretivists see sociological theory as a purpose to uncover people's meanings, by seeing the world through another viewpoint. However, positivists see natural sciences as verificationalism applied to the study of observable patterns, and they feel that sociology should follow its methods. Again, not everyone accepts this view, producing three major challenges to it. The first is Karl Popper's theory of how Science Grows. ...read more.

Both natural and social sciences attempt to explain the causes of events in terms of hidden features by observing their effects. For example, social class is not something we can directly see, but its effect on things such as life chances can be observed. On the other hand, realists see little difference between natural and social sciences, except that natural sciences are able to study closed systems in lab experiments. Overall, whether sociology is a science or not can be argued either way, but it would appear that there is more sociological evidence to suggest that sociology cannot and should not be a science. Scientific methods are not necessarily applicable to most areas of sociological study, and direct casual explanations cannot be made where individual people are involved, especially for things such as suicide where things are too personal to conduct a valid study. Scientific methods can be used in sociology, but are used differently, as meanings have to be attached to the study of people, as people make their own decisions based on the opinion or meaning they attach to a situation. Also, there are multiple sociological theories; there is no unified sociological definition or idea. Therefore, it is impossible for sociology to be considered a science. ...read more.