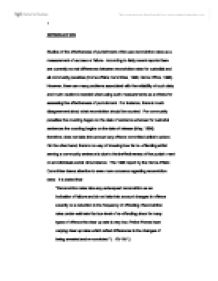 Studies of the effectiveness of punishments often use reconviction rates as a measurement of success or failure. According to fairly recent reports there are currently no real differences between reconviction rates for custodial and all community penalti

INTRODUCTION Studies of the effectiveness of punishments often use reconviction rates as a measurement of success or failure. According to fairly recent reports there are currently no real differences between reconviction rates for custodial and all community penalties (Home Affairs Committee, 1998, Home Office, 1998). However, there are many problems associated with the reliability of such data, and much caution is needed when using such measurements as a criteria for assessing the effectiveness of punishment. For instance, there is much disagreement about what reconviction should be counted. For community penalties the counting began on the date of sentence whereas for custodial sentences the counting begins on the date of release (May, 1994). therefore, does not take into account any offence committed whilst in prison. On the other hand, there is no way of knowing how far re-offending whilst serving a community sentence is due to the ineffectiveness of the punishment or an individuals social circumstance. The 1998 report by the Home Affairs Committee draws attention to even more concerns regarding reconviction rates. It is stated that: "Reconviction rates take any subsequent reconviction as an indication of failure and do not take into account changes in offence severity or a reduction in the frequency of offending; Reconviction rates under-estimate the true level of re-offending since for many types of offence the clear up rate is very low; Police Forces have varying clear up rates which reflect differences in the changes of being arrested and re-convicted " ( : XV-XV1). ...read more.

In the case of 'dangerous offenders' imprisonment is the most effective form of punishment in order to protect the general public. The problem with 'dangerous offenders' is that grave violent offences are rare occurrences and are very difficult to predict (Dunbar and Langdon, 1998). The fact is, the vast majority of prisoners are not convicted of violent offences. Of the 60,000 people sentenced to immediate custody on 1995, 76% were convicted of non-violent offences. Of the 84,000 people who received prison sentences in 1996, 20,157 were convicted for non-payment of fines (Wilson and Ashton, 1998). The question is, what should be done with persistent non-violent property offenders who constantly re-offend? The introduction of electronic tagging and probation orders with a requirement of residence in a hostel allows those offenders to be dealt with in the community while still offering significant protection to the public (Home Affairs Committee, 1998). These types of offenders are released from prison at some point and at present would not receive the same volume of rehabilitation provision that they would within a community sentence. Therefore in the long run community punishment could provide more effective protection from non-violent persistent offenders (Home Affairs Committee, 1998) COST The total annual cost of the prison service to the taxpayers is around �1.8 million, and each new prison costs an average �90 million to build (Wilson and Ashton, 1998). The annual cost per prisoner place is about �25,000. ...read more.

CONCLUSION Prisons are made such problematic places by there extreme overcrowded conditions and the wide range of offenders they have to control, care for, and contain against their will. Because of these extreme conditions prisons are less effective than community sanctions in terms of rehabilitation and cost effectiveness. Unless offenders are violent offenders or worse, they should not be sent to prison to be rehabilitated but given a community sentence. Worrall (1997) asserts that: - "There needs to be a consensus that prison can never be a genuine site of rehabilitation and that some attempts must be made to keep those criminals deemed capable of being rehabilitated out of prison" (:27). Imprisonment can offer immediate protection to the general public, however, nearly all prisoners are released at some point, and at present, will rarely have to confront their offending behaviour in order to be rehabilitated to the same extent as those who are subjected to community sanctions (Home Affairs Committee, 1998). With the provision of electronic tagging and probation orders with a required residence in a hostel, community sanctions can be just has effective in protecting the public against non-violent offenders has a prison sentence. And In the long run, maybe more so. Prison should be reserved as a punishment for the most serious offences. Prison is still accepted by many has a necessary, if not an altogether desirable 'social institution'. And for sometime yet, large numbers of offenders will be kept in them. ...read more.