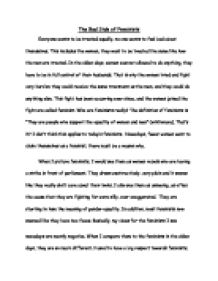 The Bad Side of Feminists. Nowadays, fewer women want to claim themselves as a feminist, there must be a reason why.

The Bad Side of Feminists Everyone wants to be treated equally, no one wants to feel bad about themselves. This includes the women, they want to be treated the same like how the men are treated. In the olden days, women was not allowed to do anything, they have to be in full control of their husbands. That is why the women tried and fight very hard so they could receive the same treatment as the men, and they could do anything else. This fight has been occurring ever since, and the women joined the fight are called feminist. Who are feminists really? The definition of feminists is "They are people who support the equality of women and men" (wiktionary). That's it? I don't think this applies to today's feminists. Nowadays, fewer women want to claim themselves as a feminist, there must be a reason why. When I picture feminists, I would see them as women rebels who are having a strike in front of parliament. They dress unattractively, very plain and it seems like they really don't care about their looks. I also see them as annoying, as often the cause that they are fighting for were silly, over exaggerated. ...read more.

This means that they want to find the right guy, get married, have children, and be the best mothers they could be. Feminism has made this a controversial issue, they claimed that wanting and reaching those goals would basically means that they had agreed to the put down of women. This is another reason why women started to refuse on being called feminist. "I personally, want to be a housewife but because of those darn feminists I am now put down because when I have children I will be a stay at home mum."(Yahoo answers) This is a response from a woman who was asked about her opinion towards feminism. The preferred feminist solution to raise a child is to be a liberated mother, which means they should drop their baby in a day care center for about 50 hours per week. Not every woman wants their own baby to be taken care by others (Harper). To raise your own baby is a part of motherhood. Like how my house mother said, "There is nothing better than to see your child grows before your own eyes" (Bakers). Based on an American demographic study, most parents believed that there must be at least one parent who stays home with the children. ...read more.

I hope that I have established a clear reasoning on why women nowadays tend to refuse to call herself as a feminist. It must be acknowledge that I am not saying that feminism is a bad thing, or a feminist is a bad person. Feminism had surely brought a lot of advantages for the women in the World. Due to them, now women can receive good education, a voice to vote, and so many more. However, feminists now are getting too far from their main goal of eliminating gender inequality. That is why; I think the feminists should stop doing what they are doing as it is hurting both themselves and others. Most feminists have certainly hurts feelings of others, especially the men as they are really put down. This might lead with the men fighting back as they have grew a lot of anger, and this could definitely damage the power and privileges that women has in this modern life. Also, the chance of feminism diminishing, disappeared, and finish is very high as quite a lot of women are tired of watching the unintelligent actions that the feminists has done. This means less women would even want to take feminism as an important issue anymore. If the feminists these days do not stop of going to far with their actions or their words, one of these consequences will start to happen. ...read more.