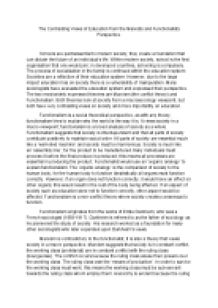 The Contrasting Views of Education from the Marxists and Functionalists Perspective.

﻿The Contrasting Views of Education from the Marxists and Functionalists Perspective. Schools are quintessential to modern society; they create a foundation that can dictate the future of an individual?s life. Within modern society, school is the first organisation that one would join; in developed countries, schooling is compulsory. The process of socialisation in the family is continued within the education system. Societies are a reflection of their education system. However, due to the large impact education has on society there is a vulnerability of manipulation. Many sociologists have evaluated the education system and expressed their perspective. The two most widely expressed theories are Marxism (the conflict theory) and Functionalism. Both theories look at society from a macrosociology viewpoint, but both have very contrasting views on society and more importantly on education. Functionalism is a social theoretical perspective, as with any theory, functionalism tries to explain why the world is the way it is. It views society in a macro viewpoint; functionalism is a broad analysis of society as a whole. Functionalism suggests that society is interdependent and that all parts of society contribute positively to maintain social order. All parts of society are essential much like a ?well-oiled machine? and society must be harmonious. Society is much like an ?assembly line?, for the product to be manufactured many individuals must process it before the final produce is produced; this means all processes are essential in producing the product. Functionalist would use an ?organic analogy? to explain functionalism. ...read more.

Value consensus according to the functionalist teaches children norms and values but Marxists would argue the ruling class creates the norms and values taught. The working class are shown there place through value consensus according to the Marxist. Factionalist view of socialisation suggests there are no influences with who children socialise with and all children disregard social class. However, there is a large correlation with bullying and social class this contradicts the functionalist ideology of unity (Due, 2008). Robert Merton an American sociologist referred to this by-product as a ?latent dysfunction? and that the function of socialisation had negative effects on society (1949). Marxists views contradicts that of the functionalist, socialisation in education is where the working class are shown there place as obedient workers. The functionalist theory suggests that socialisation in education is fair, but the conflict theory suggest social class will dictate socialisation. A varying contrast of careers exist in society, sociologist have long debated how careers are distributed. Functionalist Davis and Moore (1967) argue education helps isolate the most talented; the highest paid jobs are often ones that require the most talent. This form of role allocation is fair as all high paid jobs act as an incentive, more people will complete for them resulting with the most talented succeeding. Marxists argue that ?role allocation? maintains social divisions, the ruling class decide who gets what job. Marxists contradicts the functionalist because they argue roles allocated are unfair, it is used to create a subservient workforce. ...read more.

Functionalists argue that the hidden curriculum is essential as it creates value consensus but Marxists say it prepares pupils to be subordinate to the ruling class. Marxists and Functionalists contradict another in many ways. Marxists explain how the world should function and point out the negatives. Functionalists see how the world is and say the world will sort out its own issues. Much critique is placed on the lack of evidential studies that lack biased opinions. Both do explain society in a structural view and do not explain the huge contrast in individualism. Functionalists viewpoint is considered to be conservative and Marxists are considered to be liberal. As both theories lack substantial evidence or studies, they lack validity so there for both theories can only be classes as a sociological viewpoint. ________________ Reference Index 1. Bowles, S. & Gintis, H. (1976) Schooling in Capitalist America: Educational Reform and the Contradictions of Economic Life. New York: Basic Books. 2. Davis, K & Moore, W. (1945) Some Principles of Stratification. American Sociological Review, Vol. 10 3. Due, P (2008) Socioeconomic Inequality in Exposure to Bullying During Adolescence: A Comparative, Cross-Sectional, Multilevel Study in 35 Countries, vol. 99, no.5, APHA Press 4. Office of National Statistics (2011) Graduate earnings over the last decade. Available: http://www.ons.gov.uk/ons/rel/lmac/graduate-earnings-over-the-last-decade/2011/graduate-earnings-over-the-last-decade.html. Last accessed 19th November 2012. 5. Willis, P. (1977) Learning to Labor: How Working Class Kids Get Working Class Jobs. Columbia: Columbia University Press. 6. The Poverty Site. (2010) Educational attainment at age 16. Available: http://www.poverty.org.uk/26/index.shtml. Last accessed 19th November 2012. 7. Merton, R. (1949) Manifest and Latent Functions California: California Press 8. Parson, T. (1961) Theories of society: foundations of modern sociological theory. vol 2. Michigan: Free Press of Glencoe. ...read more.