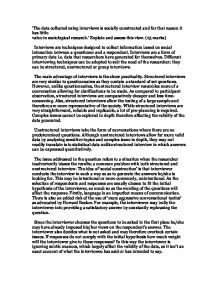 'The data collected using interviews is socially constructed and for that reason it has little value in sociological research.' Explain and assess this view.

Firstly, language is an imperfect means of communication. There is also an added risk of the use of 'more aggressive conversational tactics' as advocated by Howard Becker. For example, the interviewer may bully the interviewee into providing a satisfactory answer by constantly rephrasing the question. Since the interviewer chooses the questions to be asked in the first place he/she may have already imposed his/her views on the respondent's answer. The interviewer also decides what is not asked and may therefore overlook certain issues. If responses do not comply with the initial hypothesis how much weight will the interviewer give to those responses? In this way the interviewer is ignoring subtle nuances, which largely affect the validity of the data, as it isn't an exact account of what the interviewee has said or has intended to say. The ethnicity, background and gender of the interviewer have often been shown to have a dramatic affect on the interviewee. ...read more.

Informal interviews can address very sensitive issues and can lead to discoveries into new areas that the interviewer may have not taken notice of before the interview was conducted. Such interviews ensure honesty and validity. Another alternative can be the approach adopted by the feminist researcher Ann Oakley (1981) in her study of childbirth who believed that the interviewers should be empathetic towards the interviewees. The usefulness of interviews is undermined by the fact that they are socially constructed. As interviews are based on social interaction it is hard to completely overcome this problem. Although most bias is unconscious, one way of overcoming it is by not seeking answers which sociologist wish to obtain. The usefulness of interviews is largely affected by the questions asked and interpretation on part of the sociologist. It is therefore important that interviewers conduct the interview, which total objectivity so that the validity of responses is not affected by outside sources. For this reason, well-trained interviewers should conduct interviews. Perhaps even a combination of methodologies can overcome this problem e.g. a combination of participant observation and unstructured interviews. . ...read more.