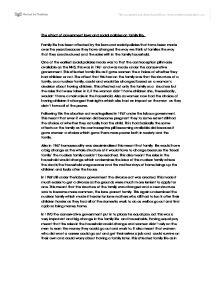 The effect of government laws and social policies on family life.

The effect of government laws and social policies on family life. Family life has been affected by the laws and social policies that have been made over the years because they have changed the way we think of families the way that they are structured and the roles with in the family household. One of the earliest social policies made was to that the contraception pill made available on the NHS, this was in 1961 and was made under the conservative government. This affected family life as it gave women the choice of whether they had children or not. The affect that this had on the family was that the structure of a family, as a nuclear family, could and would be changed based on a woman's decision about having children. This affected not only the family as a structure but the roles that were taken in it, if the woman didn't have children she, theoretically, wouldn't have a main role in the household. ...read more.

In 1969 still under the labour government the divorce act was created. This made it much easier to get a divorce as the grounds were much more lenient to apply for one. This meant that the structure of the family was changed and a new structure was to become more common, the lone-parent family. This again undermined the nuclear family which made it harder for lone mothers who still had to look after their children harder as they had all of the domestic work to do as well as go out and find a job so bring money home. In 1970 the conservative government put in to place he equal pay act this was a very important and big change in the family life and households. Having equal pay meant that the roles in the household could change and women didn't rely on the men to earn the money they could go out and work to. ...read more.

This didn't have that much of a change on the family but a change on how children were valued in the household. In 2000 the labour government ended the married couple's tax allowance. This had an effect on not so much the family but on marriage as it stopped encouraging people to get married. This also meant that because the allowance was given to the men when it ended it made the marriage more equal. All of these policies and acts made by each government changed families to how they are today, each of the acts have made a difference which is good but they all undermine something whether it is roles in the family, the structure of families or the power throughout the family. For example the feminist theory agrees with the equal pay act as they want men and women to have equal opportunities. However the new right would disagree with this as they would say that having a nuclear family and that meant the woman's main role was to raise the children and look after the house. ...read more.