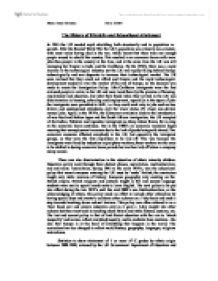 The History of Ethnicity and Educational Attainment

The History of Ethnicity and Educational Attainment In 1945 the UK needed rapid rebuilding, both structurally and in population re-growth. After the Second World War the UK's population was virtually non-existent, with most males having died in the war, which meant that there were not enough people around to rebuild the country. This resulted in an economic boom with more jobs than people in the country at the time, and at the same time the UK was still managing her Empire in India and the Caribbean. By the 1950's there was a rapid increase in the technological industry, yet the UK was rapidly falling behind Europe technologically and was desperate to increase their technological market. The UK soon realised that they could not afford and Empire and the rapid technological development needed to rival the market of the rest of Europe, so the decision was made to create the Immigration Policy. Afro-Caribbean immigrants were the first coloured people to arrive in the UK and were lured there by the promise of housing, employment and education, but what they found when they arrived in the UK was discrimination in housing, schooling and employment, especially in the types of jobs the immigrants were permitted to fulfil, i.e. ...read more.

One such factor is language. In some Asian households English is not the main language used. In some West Indian households 'Creole' or 'patois' are spoken. However, recent research evidence does not support the view that language is an important factor. A study by Geoffrey Driver and Roger Ballard found that by the age of 16, Asian children whose main home language was not English were at least as competent in English as their classmates. The Swann Report found that linguistic factors might hold back the progress of a few West Indian children, but for the vast majority they were of no significance. Another factor considered to influence educational attainment in ethnic minorities is the nature of family life. From this point of view West Indians are held to have a family life, which fails to encourage children to do well in education and in which there is an inadequate provision of toys, books and stimulation from parents. It has also been suggested that the West Indian population of Britain has a high proportion of one-parent families and large numbers of workingwomen who leave their children without close parental supervision in the early years of their life. ...read more.

Ethnic minority groups with a different first language may not learn the English language efficiently as a second language. Separate schooling divides communities which may lead to lack of understanding in people in other cultures, equally, if single faith or culture only provides one set of norms and values, they may not recognise others. Separate schooling can also be very expensive and exclusive meaning that even with separate schooling, many of the old issues of discrimination and segregation thus enhancing the problems already existent in mixed schooling. The variety of explanations examined above are not necessarily mutually exclusive. It is probable that a number of factors work together in producing the lower levels of achievement found in some ethnic minority groups. The Swann Report concluded that racial discrimination inside and outside school, along with social deprivation, were probably the main factors. Although the Swann Report attached little importance to cultural factors, it seems possible that they play some part in explaining differences in levels of achievement between ethnic minorities, as well as between ethnic minorities and the rest of the population. Given the highly controversial nature of this issue it is not surprising that such varied explanations exist, and that a definitive answer to the question of why some ethnic minorities do poorly in education has not been reached. Name: Alexis Cormano Form: 12CSY ...read more.