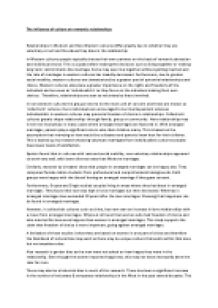 The influence of culture on romantic relationships

There may also be a historical bias in much of this research. There has been a significant increase in the number of voluntary & temporary relationships in the West in the past several decades. This would also explain the significant increase in voluntary relationships in non-Western cultures such as India and China. Moreover, even when studying cross cultures there?s always differences within the cultures so it makes findings hard to generalise even within the cultures because not one person is the same. This represents a cultural bias where a culturally specific idea is applied to a culture where it is less relevant showing imposed etic. In conclusion, these explanations provide a valuable explanation to how relationships form under the influence of the culture. However, not everyone in the culture will follow the social norms so it?s hard to generalise the findings to each culture saying that?s how they do things. ...read more.