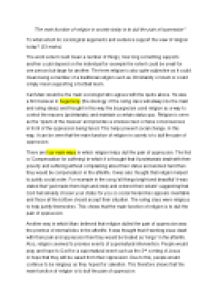 The main function of religion in society today is to dull the pain of oppression To what extent do sociological arguments and evidence support the view of religion today?

﻿?The main function of religion in society today is to dull the pain of oppression? To what extent do sociological arguments and evidence support the view of religion today? (33 marks) The word extent could mean a number of things; how long something supports another could depend on the individual for example the extent could be small for one person but large for another. The term religion is also quite subjective as it could mean being a member of a traditional religion such as Christianity or Islam or could simply mean supporting a football team. Karl Marx would be the main sociologist who agrees with the quote above. He was a firm believer in hegemony (the ideology of the ruling class will always be the main and ruling ideas) and thought in this way the bourgeoisie used religion as a way to control the masses (proletariats) and maintain a certain status quo. ...read more.

Due to this, people would continue to be religious as they hoped for salvation. This therefore shows that the main function of religion is to dull the pain of oppression. There are many real life examples which support Marx?s view of religion. Firstly, the Hindu caste system suggests that God has placed people into particular castes such as the Brahmins at the top to the ?untouchables? at the bottom. Through this system, it is thought that two castes should not marry or interact with each other as God has separated them for a reason. The ?untouchables? accept their status as they believe God has given it to them. Also the slavery system in southern USA where the slaves were made to convert to Christianity to provide them with a sense of hope and comfort (compensation for suffering) whilst doing manual labour. It was also thought that medieval kings and queens justified their status by saying they had the ?divine right of kings? showing that the ruling class were in fact more religious simply to help justify social order. ...read more.

Furthermore, the idea of ?false consciousness? is one that is very abstract as people may not be ?blind to their oppression? at all. They may simply not see it as oppression or if they do, they may choose to live with it as it doesn?t seem to affect their lives in a great way. The existence of religion is not actually explained; religion is subjective as different individuals will choose to interpret the ideologies of religion in their own way and to suit their own needs (Postmodernism). This means that not every religious person believes to justify their status or to dull their oppression. This therefore shows that the main role of religion is not to dull the pain of oppression. Overall, it may be more appropriate to consider the functionalism theory which states that the main role of religion is actually to bind society together and create social solidarity with shared norms and values. Or the role of religion may be to dull the pain of patriarchy for women as Feminists would say. ...read more.