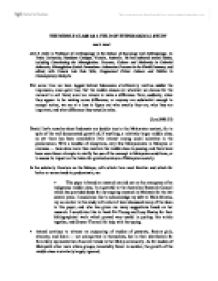 THE MIDDLE CLASS AS A FIELD OF ETHNOLOGICAL STUDY

THE MIDDLE CLASS AS A FIELD OF ETHNOLOGICAL STUDY Joel S. Kahn* Joel S. Kahn is Professor of Anthropology at the School of Sociology and Anthropology, La Trobe University, Bundoora Campus, Victoria, Australia. He has authored several books, including Constituting the Minangkabau: Peasants, Culture and Modernity in Colonial Indonesia, Minangkabau Social Formations: Indonesian Peasants in the World Economy, and edited, with Francis Loh Kok Wah, Fragmented Vision: Culture and Politics in Contemporary Malaysia For some time we have lagged behind Indonesian stratificatory realities under the impression, once quite true, that the middle classes (or whatever we choose for the moment to call them) were too minute to make a difference. Now, suddenly, when they appear to be making some difference, or anyway are substantial enough to compel notice, we are at a loss to figure out who exactly they are, why they are important, and what difference they actually make. (Lev,1990:25) Daniel Lev's remarks about Indonesia are doubly true in the Malay-sian context, for in spite of the well-documented growth of, if anything, a relatively larger middle class, as yet there has been remarkably little interest among social scientists in the phenomenon. With a handful of exceptions, very few Malaysianists in Malaysia or overseas - have done more than mention the middle class in passing; and there have been even fewer attempts to clarify the use of the concept in Malaysian conditions, or to assess its impact on the taken-for-granted contours of Malaysian society. In the scholarly literature on the Malays, with which I am most familiar and which for better or worse tends to predominate, we * This paper is based on research carried out on the emergence of an indigenous middle class. I am grateful to the Australian Research Council which has provided funds for my ongoing research in Malaysia for the last several years. I would also like to acknowledge my debt to Maila Stivens, my co-worker in this study with whom I have discussed many of the ideas in this paper, and who has given me many suggestions based on her research. ...read more.

Indeed he inherited at least the "problem of the middle class", if not his particular solution, more or less directly from the earlier work of German economic historians (see Kahn, 1990). And if this is true of the German tradition, it is the case for nineteenth century French and Anglo-Saxon social theory as well. The fact that the problem of the middle strata has a fairly long and established history, at least in European social thought, might lead us at least to be slightly sceptical of recent announcements of the arrival of the "new" middle classes. Be that as it may, recent attempts to come to grips with the phenomenon of the middle class have generally attempted to answer the questions posed by Lev, namely "who exactly they are, why they are important, and what difference they actually make". Given that so much ink has been spilled in attempting to answer these questions, and that no definitive answers have yet been given, it would be presumptuous of me to claim to be able to provide any final answers here. Instead I would like only to refer to what I see to be some major difficulties in the way the "problem of the middle classes" is currently being posed, difficulties which are clearly manifest in Saravanamuttu's paper. These difficulties are perhaps most clearly manifest in the ambiguity in our usages of the term "middle class". Are we speaking of a singular or a plural phenomenon, of a middle class or of the middle classes? There are a variety of reasons why we cannot decide exactly "who they exactly are". But two which have to do with the very way the problem has been posed appear to be particularly pertinent. These are, firstly, that there seems to be a widespread but on reflection highly questionable assumption that the middle class will in some formal sense resemble other modern classes, the bourgeoisie and the proletariat. ...read more.

On looking for a relation between middle class position and consciousness I would want to look more closely at the links between the varieties of middle class discourse mentioned here and that matrix. I have discussed elsewhere one way in which we might link the constitution of power relations in the modern state and the emergence of both universalistic and particularistic discourses among its employees (see Kahn). In the case at hand, such an exercise would involve us in looking at the way power relations in the modern Malaysian state are themselves constituted by ethnic differentiation, particularly in the period since the decline of consensual elite politics (see Kahn and Loh, forthcoming). This, in turn, would allow us more accurately to interpret the potential of various segments of the employees of that state to articulate particularistic or universalistic discourses and political practices. This is necessarily brief and telegraphic. But my point is that once we stop trying to fit the middle class into a model of class established for nineteenth century capitalism, once we recognise that Malaysian "middle classes" are just as embedded in the state as they are in capitalist economic relations, and once we recognise that the sphere of political control is not simply reducible to the sphere of capitalist economic rationality we will be in a better position, when talking of the Malaysian middle class to understand more clearly "who exactly they are, why they are important, and what difference they actually make". And moreover it is precisely questions such as these which should be concerning anthropologists in and of contemporary Malaysia. Notes 1. I am indebted to Clive Kessler and Noraini Othman for drawing this article to my attention. 2. The literature here is vast. A good example, from a region in which I have done research, is found in a series of reports on the State of Negeri Sembilan (see Universiti Kebangsaan Malaysia, n.d.). A discussion of the impact of the NEP on urban Malays is found in Osman (1987). 3. ...read more.