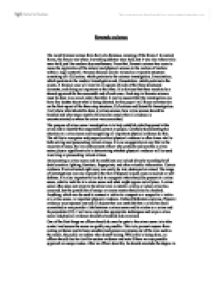 forensic science The word Forensic comes from the Latin forensus, meaning of the forum.1 In ancient Rome, the forum was where lawmaking debates were held, but it was also where trials were held just like modern day courthouses. From that, forensic science has come to mean the application of the natural and physical science to the motion of matters within a legal context2. Forensic Science can be viewed as a tripartite structure consisting of a Collection, which pertains to the science investigation, Examination, which pertains to the medical investigation and, Presentation, which pertains to the courts. A forensic case will involve all aspects of each of the three structured elements, each being as important as the other. It is obvious that there needs to be a shared approach for the successful end of each case. Each step in forensic science must be done in an exact order; therefore it can be assured that the investigation can have few doubts about what is being debated. In this paper I will focus my attention on the first aspect of the three-step structure, Collections and Scientific Investigation. I will show what should be done at crimes scenes, how crime scenes should be handled and what steps must be followed to ensure that all evidence is uncontaminated as when the crime was committed. The purpose of crime scene investigation is to help establish what happened at the crime and to identify the responsible person or people. Carefully documenting the situation at a crime scene and recognizing all-important physical evidence do this. The ability to recognize and properly collect physical evidence is often times vital to both solving and prosecuting violent crimes. ...read more.

A sketch is usually made of the scene as if one is looking straight down or straight ahead. Measurements should be taken at crime scene of distances between two objects, room measurements and key pieces of evidence. Two measurements should be taken at right angles to each other from two location points. Each measurement should be double measured to make sure they are correct and accurate. A professional using all the measurements and notes taken by the investigators can make a final sketch. However, the original sketches should not be thrown out but saved along with other key evidence in case a disagreement occurs or something was missed. Once the crime scene has been recorded with videotaping, still photography and sketches, gathering of evidence can occur. Gathering and locating physical evidence is a very slow a tiresome job when done correctly, however, it can surrender many clues. One of the first things an investigator must determine is the size and area that must be searched. The main focus search must include all likely points of entry and exits used by the criminals. When searching, certain patterns may be used to cover and examine the area. There are about three different ways in which an area can be examined. One way is a spiral search method, which is by starting in the center of the scene and work in a spiral outward do this method until all of the scene has been covered and checked. Another method and usually the preferred method is the grid method. This is done by marking the crime scene into a grid and walking in a straight line from one side of the grid towards the other where as you make 180 degrees turn and come back a few steps over from where you just searched. ...read more.

The purpose of crime scene investigations is to help establish what happened, and to identify the responsible persons or victims. To figure this out, careful recording and investigations of a crime scene must take place. Recording the crime scene details such things as place, time, conditions, lighting, fingerprints, evidence, etc. To record a crime scene such things as videotape, still photography and sketches are used to give a story or time line of what happened and what took place. Once the crime scene has been recorded, actual inspection for physical evidence occurs. This is where the investigators look for clues such as fingerprints, bloodstains, items or anything, which might lead them towards a suspect. When gathering evidence, each item should be place in separate containers and certain rules for blood stained clothes and fire investigations apply. The investigators must keep tract and record everything in which they recover from a crime scene. Searching a crime scene is a long and thorough process, however, it will surrender many clues when done properly. Once the evidence is found, recorded and packaged, it must be sent to a crime lab for further processing. Each item when shipped should be recorded, logged and accounted for from person to person so when used in a trial, the evidence has been accounted for from beginning to end. The final thing investigators must make sure is that all evidence was seized properly and with probable cause. This is the main reason why in so many court cases evidence is thrown out, improper searches and seizures. If any investigator is in doubt on whether or not a place or person can be search, it is always best to obtain a warrant for that such reason. ...read more.