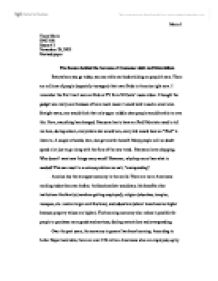 The Reason behind the Increase of Consumer debt and Materialism

Tracy Marin ENG 100 Essay # 2 November 29, 2005 Revised paper The Reason behind the Increase of Consumer debt and Materialism Everywhere you go today, you see white ear buds sticking on people's ears. There are millions of people (especially teenagers) that own iPods in America right now. I remember the first time I saw an iPod on TV from 50 Cents' music video. I thought the gadget was really cool because of how much music it could hold in such a small size. Straight away, one would think that only upper middle class people would be able to own this. Now, everything has changed. Everyone has to have an iPod! My sister used to tell me how, during school, everywhere she would turn, every kid would have an "iPod" to listen to. A couple of weeks later, she got one for herself. Many people will no doubt spend a lot just to go along with the flow of the new trend. Everyone loves shopping. Who doesn't want new things every week? However, why buy more than what is needed? This can result to a serious problem we call, "overspending". America has the strongest economy in the world. There are more Americans working today than ever before. As functionalists would say, this benefits other institutions like family (members getting employed), religion (churches, temples, mosques, etc. ...read more.

Remember the time when only research or office areas had computers; ever since it was introduced to schools, now every household has to have at least one. Plus, there is also the technology's feature of 'planned obsolescence'. Producers or manufacturers trick customers in to believing that the old product they own is no longer good enough - now that there is an updated, modern and more desirable version available. Manufacturers have been designing products that would deliberately wear out or break in the future; thus, the consumer would be forced to buy another one. This helps keep the business moving. As a result of the rise of technology, credit cards found their way out to the society. They have always allowed consumers to buy more than they normally would. People think of it like "free money". For instance, students are able to buy things that they can't even afford and then later, they get cramped up with large bills. Credit cards make it so much easier to spend. Media with the increasing economy and the aid of peer pressure also plays its part in the society and tries to promote 'competition' between groups. There has been a growing importance of television ever since human race got a hold of this device. Nearly all of those characters that appear in programs are upper middle class or wealthy. ...read more.

"Time is taken away from the things that can give true happiness, such as relationships with people that are close to you. It's not absolutely necessary that chasing after material wealth will interfere with your social life. But it can, and if it does, it probably has a net negative pay-off in terms of social life satisfaction and well-being" (Deiner). Although the Consumer Federation of America blames the credit card industry and banks for excessive debt that Americans are with, other banks argues that 96% of their clients pay on time (Koch). They have made strict standards for extending credit lines. However, the act of overspending all comes down to the consumer's own will and responsibility, as they are the only ones who know their current real situation. It is helpful to carry only one or two credit cards that are limited to 20% of their annual income, remembering to pay balances in full every month. This way the consumer is not heavily distressed by sudden huge debts. Also, sometimes, it's not so smart to purchase more goods than you need. "It's better to figure out whether these expenditures which comprise an increasing amount of most Americans' budgets are really worth it in terms of value for the dollar" (Schor). Research shows that Americans can reduce their expenditures by 20% without interrupting on their quality of life. As Schor would say, "Spending less can actually make you feel better". ?? ?? ?? ?? Marin 1 ...read more.