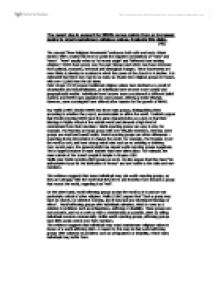 The recent rise in support for NRMS comes mainly from an increased desire to reject mainstream religious values. Evaluate this claim

The recent rise in support for NRMS comes mainly from an increased desire to reject mainstream religious values. Evaluate this claim. (40) The concept "New Religious Movements" embraces both cults and sects. Eileen Barker (1984) created this term to avoid the negative connotations of "cults" and "sects". "New" usually refers to "of recent origin" and "different from existing religions". NRMS have grown over the past 30years and which may have stemmed from political, economic, technical and ideological changes. These movements are more likely to develop in societies in which the power of the church is in decline. It is estimated that there now may be as many as 25,000 new religious groups in Europe, with over 12,000 from the UK alone. Peter Berger (1970) argues traditional religious values have declined as a result of urbanisation and industrialisation, as individuals have become more socially and geographically mobile. Individuals have become more accustomed to different belief systems and NRMS have appealed to some people, offering a better lifestyle. However, some sociologists have offered other reasons for the growth of NRMS. Roy Wallis (1984) divides NRMS into three main groups, distinguishing them according to whether they reject, accommodate or affirm the world. Troeltsch argues that World-rejecting NRMS have the same characteristics as a sect, in that their ideology is highly critical of the outside world and demand a high level of commitment from their members. World-rejecting groups can vary in size; for example, The Moonies are large group with over 926,000 members, whereas some groups are small and based locally. ...read more.

Another reason for the growth of NRMS is marginality. Weber argues that NRMS were more likely to arise within groups that were marginal in society: members of groups outside the mainstream of social life often feel they are not receiving the economic rewards that they deserve. Weber points out that those who are marginalized in society may find status or a legitimising explanation for their situation through a theodicy, (a religious explanation and justification) that offers salvation. Many NRMS offer explanations to individuals and promise them a "sense of honour" in the afterlife. The growth of NRMS in the USA was accomplished through the recruitment of marginal and disadvantaged groups. For example, black Muslims offered hope to "The Negro in the mud". However, it is not just disadvantaged groups that joined NRMS. Many members of NRMS in the 1970's were white middle-class Americans and Europeans. Wallis argues that despite their middle-class backgrounds, they were usually "hippies, drop-outs, surfers, LSD and marijuana users." This evidence suggests that one reason for the growth of NRMS is marginality. New religious movements offered the disadvantaged groups within society a better life on earth and a "sense of honour" in the afterlife. Similarly, one other reason for the growth of NRMS is relative deprivation. Relative deprivation refers to deprivation that people actually feel. For example, Middle-class members may feel more deprived than the poor, in that they do not lack material wealth, but may be deprived spiritually. ...read more.

In the middle ages, the Church was the dominant social institution in Europe, wielding enormous social power. Bruce argues that the decline of Christianity in the modern world is not a result of people becoming more rational and less superstitious. He argues that the process of modernisation in the 16th Century undermined the place of religion in society. However, Rodney Stark (1999) disagrees with Bruce's argument in 2 key ways. Firstly, Stark strongly disputes the claim that religion was dominant in the middle ages, claiming that it is a myth. He argues that historical records show widespread indifference to religion amongst the general population. Furthermore, he argues that when people did go to church, they did so unwillingly and behaved inappropriately. This evidence suggests that religious participation is not in decline and it was never high anyway. Secondly, Stark argues that religion in modern society has not declined, but that it is flourishing. In the USA, he claims that church membership has trebled, not declined. In conclusion, there is enough evidence to suggest that the recent rise in support for NRMS comes mainly from an increased desire to reject mainstream religious values. Individuals may reject traditional religious values in favour of a NRM, as it may offer solutions to problems such as unhappiness or disability, spirituality, or the hope of a better life. This evidence is supported by the secularisation debate, in that there is evidence to suggest that traditional religions are in decline. However, it would be wrong to conclude that religion in modern society is in decline, as argued by Rodney Stark. Jessica Pemberton. ...read more.