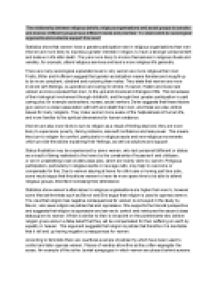 The relationship between religious beliefs, religious organisations and social groups is complex and diverse. Different groups have different needs and priorities. To what extent do sociological arguments and evidence support this view?

﻿?The relationship between religious beliefs, religious organisations and social groups is complex and diverse. Different groups have different needs and priorities.? To what extent do sociological arguments and evidence support this view? Statistics show that women have a greater participation rate in religious organisations than men. Women are more likely to express a greater interest in religion, to have a stronger personal faith and believe in life after death. They are more likely to involve themselves in religious rituals and worship, for example, attend religious services and lead a more religious life generally. There are many sociological explanations as to why women are more religious than men. Firstly, Miller and Hoffmann suggest that gender socialization means females are brought up to be more compliant, obedient and nurturing than males. They state that women are more involved with feelings, co-operation and caring for others. However, Walter and Davie see women as more exposed than men, to the ups and downs and changes of life. This is because of their biological involvement through childbirth, and through their greater participation in paid caring jobs, for example as teachers, nurses, social workers. ...read more.

According to feminists there are countless example of patriarchy which have been used to control and later oppress women. Places of worship show this as they often segregate the sexes. An example of this is the Jewish synagogue in which women are placed behind screens separate from the men who in turn are situated in the main centre space. This highlights the marginalisation between the men and women. Although there are some rising female readers of religion, scriptures were first and foremost written and interpreted by men and it is men that are the head of the churches in Islam and Catholicism. This could mean that many values and ideologies such as wearing the Burka, beatings, female circumcision and bans on contraception may have been misinterpreted for men?s gain and passed on through generation to generation. May religious women are still not permitted to become priests or are only allowed to work themselves up to a certain level before they hit a religious ?glass ceiling?, identifying where they want to be, but not being able to reach it due to the constraints set upon them. On the other hand, there are views to suggest that women are no longer oppressed in religion. ...read more.

Lynch suggests that young people may be running away from conventional ideas of religion as they can now go ?spiritual shopping?. This involves an increasing exposure and accessibility to a diversity range of religious and spiritual ideas. This has encouraged new ways of exploring religion and spirituality. Young people may be choosing to take of their religion, of whatever faith or mix of beliefs, as a private matter. Davie expressed this in the words ?believing without belonging?. This is where individuals may have a belief in something, however they do not chose to practice this belief. Secular spirituality and the sacred, Lynch suggested that young people may not have lost all religiosity , but that is simply finding new forms, many of which are associated more with the secular and non-religious world than with religious as it is currently understood by most people. Pragmatic reasons also mean there are a range of possible more practical or pragmatic explanations for the decline of religious belief and commitment amongst young individuals. Leisure activities have become a much bigger part of life, and shops and pubs all open for very long hours, including Sundays. Young people have more demands on their time and they may simply have more interesting ad enjoyable things to do. ...read more.