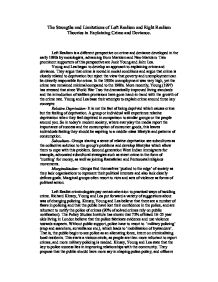 The Strengths and Limitations of Left Realism and Right Realism Theories in Explaining Crime and Deviance.

The Strengths and Limitations of Left Realism and Right Realism Theories in Explaining Crime and Deviance. Left Realism is a different perspective on crime and deviance developed in the early 1980s by sociologists, advancing from Marxism and Neo-Marxism. Two prominent supporters of this perspective are Jock Young and John Lea. Young and Lea began to develop an approach to explaining crime and deviance. They argue that crime is rooted in social conditions and argue that crime is closely related to deprivation but reject the view that poverty and unemployment can be directly responsible for crime. In the 1930s unemployment was very high, yet the crime rate remained minimal compared to the 1980s. More recently, Young (1997) has stressed that since World War Two the dramatically improved living standards and the introduction of welfare provisions have gone hand-in-hand with the growth of the crime rate. Young and Lea base their attempts to explain crime around three key concepts: Relative Deprivation- It is not the fact of being deprived which causes crime but the feeling of deprivation. A group or individual will experience relative deprivation when they feel deprived in comparison to similar groups or the people around you. So in today's modern society, where everyday the media report the importance of success and the consumption of consumer goods, this leaves individuals feeling they should be aspiring to a middle-class lifestyle and patterns of consumption. ...read more.

Along with the advantages of Left Realism it also has its weaknesses, the theory neglects to recognise other responses to relative deprivation and marginality other than crime and does not consider other theories such as Merton's Retreatism, Ritualism or Rebellion. The research that Left Realism was founded on is based on Victim Survey's to measure the extent of fear of crime within a community, a method that is not always reliable or accurate. Some crimes are either under- reported or over-reported, making the statistics and figures unreliable and crimes such as white-collar crime aren't paid much attention. The Left Realism theory only explains why the relatively deprived turn to crime, yet it fails to explain why some individuals do not choice a deviant career despite how other could consider them relatively deprived. Whatever its advantages or disadvantages, left realism has undisputedly shaped social policy much more profoundly than any other criminological theory. The Labour government's slogan 'tough on crime, tough on the causes of crime' mirrors the fundamental concepts of left realist thinking, and now, policies have been implemented so that the public can be employed to carry out routine police tasks; giving officers more time for investigation and follow-up work. Right Realism is now, arguable, the greatest influence on currant Home Office Policy of all theories of crime, because of the practical policies for crime prevention which derive from it. ...read more.

Their theories also assume that all criminal acts are thought out and that the offender has carefully weighed up the benefits and cost of their actions, yet some acts are irrational and impulsive having no gain or objective, such as vandalism and violence. The 'zero tolerance' approach taken by police can cause an over-emphasis on minor crimes and divert crucial resources away from tackling more serious offences that cause greater harm to people. The increase policing in an area also has the possibility of just displacing the crime into another area, moving it around instead of reducing it. Despite being two different theories on the explanation of crime and deviance Left and Right Realism do converge, or agree, in certain policy areas. Both sides recognise that there exists an actual crime problem which has destructive effects on communities and take on a pragmatic view, agreeing that as well as discovering the theory behind criminal and deviant behaviour you also need a practical approach applied to tackle the problem. Furthermore, Left and Right Realists address the role of the victim in crime, unlike other theories. In conclusion both left and right realism are good at explaining crime and deviance as they both take on different approaches to look at the subject. Although both are weak theories on their own, if they are used together or are merged, they can be used to give a fuller view on the causes of crime and deviance. ...read more.