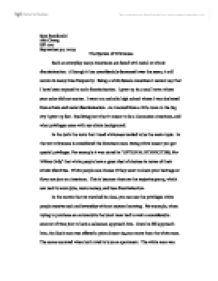 The system of whiteness.

Sara Bandauski Ada Cheng ISP 200 September 30, 2003 The System of Whiteness Each an everyday many Americans are faced with racial or ethnic discrimination. Although it has considerably decreased over the years, it still occurs in many lives frequently. Being a white female American I cannot say that I have been exposed to such discrimination. I grew up in a small town where your color did not matter. I went to a catholic high school where I was sheltered from ethnic and racial discrimination. As I moved from a little town to the big city I grew up fast. Realizing just what it meant to be a Caucasian-American, and what privileges came with my ethnic background. In the both the texts that I read whiteness tended to be the main topic. In the text whiteness is considered the dominate race. Being white meant you got special privileges. For example it was stated in "OPTIONAL ETHNICITIES, For Whites Only" that white people have a great deal of choices in terms of their ethnic identities. White people can choose if they want to share your heritage or if you are just an American. ...read more.

I know that I have different privileges than others and I often take them for granted. I know I am often categorized as a white and may get a job over someone who is of a different color, just as I may not get a job because of my color. They are many places that have to reach a certain quota of different races. For example, at the University of Michigan, black students were given more points on there applications because they were of the minority. They turned down many smarter students because they need to reach their quota of minority students. But today is very apparent that white people are given countless more opportunities than people of other ethnic background. "It is not until one comes in contact with many people who are different from oneself that individuals realize the ways in which their backgrounds may influence their individual personality", (Andersen and Collins 422). From the story "For Whites Only?," many different thoughts and opinions arise about race and segregation. Since I left my suburban lifestyle and moved to the city, I have met numerous people that have opened my mine to new cultures, beliefs, and practices. ...read more.

An American is anyone who understands the need to use one's mind and wits to meet life's challenges. An American is anyone who understands that achieving the best in life requires risks. Immigrants have no assurance of success in a new land with different habits, institutions, and language. They leave friends, relatives, and familiar places, often risking their lives to cross oceans and hostile country to reach their new homes. But they, like all Americans, understand that the timid achieve nothing and when times are bad there is always hope for a better life. The nature of Americans explains the precious opportunity that has drawn millions to these shores. The Declaration of Independence states that all men are endowed "with certain unalienable rights that among these are life, liberty and the pursuit of happiness." Americans seek personal liberty, to live as they see fit, and to worship as they please. An American doesn't need to share a common language, or the same ethnic background. That's why America is such a great country because its differences bring all of us together. Americans are united by a love of liberty, respect for the freedom of others, and an insistence on their own rights as set forth in the Declaration of Independence. ...read more.