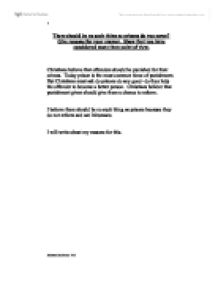 There should be no such thing as prisons do you agree

There should be no such thing as prisons do you agree? Give reasons for your answer. Show that you have considered more than point of view. Christians believe that offenders should be punished for their crimes. Today prison is the most common force of punishment. But Christians must ask do prisons do any good- do they help the offender to become a better person. Christians believe that punishment given should give them a chance to reform. I believe there should be no such thing as prisons because they do not reform and are Inhumane. I will write about my reasons for this. Firstly I believe that prisons are Inhumane. They are unchristian. They are Inhumane because-: Men have to do a thing called slopping out this was emptying bowls and their chamber. Also they all ate in the cell, they have to get washed and shaved in the cell too. They get a half a hours exercise and locked up again to six o'clock. They then slop out again and get rid of their trays, finally they are locked up for the rest of the night. Women also have a hard time too. ...read more.

But if prisoners were given a second chance they would be able to reform, prisons don't reform either. Billy aged 55 said "I have been in and out of the nick for the last 35 years. I spent no more than 5 of them free. I cant get a job, I have no family and it is the only place I really know. I feel secure inside. I'll die inside- I know that". Bernard Shaw wrote "to punish is to injure, to reform is to heal. You cannot mend a person by damaging them". Many organisations are working towards trying to reform the criminal justice system so more offenders repay society through things like community service, compensation or probation. The cost of locking people in prison is a tremendous burden on society. These are some concerned organisations:- NARCO (national association for the care and resettlement of offenders) Gives prisoners help and advice on their release. Howard league for penal reform Puts pressure on the government to make prisons more humane and fairer places. "What is needed is for people who have the imagination which springs from caring and not the desire to punish to set up centres where the young and disaffected can be educated for and together again. (Chris tchakovsky, women in prison) ...read more.

It helps the prisoner prepare for coming outside; they may get a certain education or learn a trade which means they have a better chance of getting a job. Conclusion Having considered both points of view. I still feel that there should be no such thing as prisons in a truly Christian society. Prisons should only be used as a last resort not as a dumping ground. We cannot get rid of the prisoners immediately. But we still need a form of punishment which allows the criminal a chance to reform. They need there pride and there dignity back. They also need self confidence and self esteem in order to become a better person. People are in prison usually come from poor backgrounds, greed, personal revenge, unemployment, boredom or drugs and they go back to the same things that made them commit crime in the first place. We must look for alternatives. Some successes are like community service for minor crimes but in case of a serious crime rehabilitation (REHAB). It might be better to get restorative justice. This is where the criminal comes face to face with the victim. ?? ?? ?? ?? Michael McErlain Y12 ...read more.