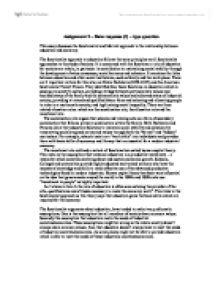 The functionalist approach to education follows the same principles as all functionalist approaches to the study of society. It is concerned with the functions or role of education for society as a whole, in particular its contribution to maintaining social stability through the development of value consensus, social harmony and cohesion. It examines the links between education and other social institutions, such as family and the work place. There are 2 important writers for this who are Emile Durkheim (1858-1917) and the American functionalist Talcott Parson. They identified four basic functions on education which is passing on society’s culture, providing a bridge between particularistic values and ascribed status of the family and the universalistic values and achieved status of industrial society, providing a trained and qualified labour force and selecting and allocating people to roles in a meritocratic society, and legitimizing social inequality. There are three related allocation roles: which are the socialisation role, the allocation role and the vocational role.

The socialisation role argues that schools and training acts as a form of secondary socialisation that follows primary socialisation within the family. Both Durkheim and Parsons claim that education functions to maintain social stability and cohesion by transmitting socially agreed norms and values through both the “formal” and “hidden” curriculum. For example, schools insist on a “work ethic” into individuals and provides them with basic skills of numeracy and literacy that are essential for a modern industrial economy.

The vocational role outlined a variant of functionalism called human capital theory. This rests on the assumption that technical education is a productive investment – a means by which societies can bring about and sustain economic growth. Schools, Colleges and universities provide highly educated and trained workers who have the necessary knowledge and skills to make effective use of the advanced productive technologies found in modern industries. Human capital theory has been very influential on the idea that governments around the world in the 1980s and 1990s who see “investment in people” as highly important.

As it states in item A the role of education is often seen as being the provider of the sills, qualifications and attitudes necessary to make the economy work”. This links to the functionalist approach as this theory says that education gains the basic skills which are required for the economy.

Marxist perspectives on education emphasize the way the education system reproduces existing social class inequalities, and passes them on from one generation to the next. At the same time, it does this by giving the impression that those who fail in education do so because of their lack of ability and effort, and have only themselves to blame. In this way, people are encouraged to accept the positions they find themselves in after schooling, even though it is disadvantages arising from social class background that create inequalities in educational success.

The vocational role seen from the Marxist perspective sees schools and institutions of social control which equip pupils with appropriate attitudes for their future exploitation in the world of work. Bowles and Gintis put the case for a clear and direct relationship between education and the economy in which educational change is determined by the needs of the economy. Marxists remain highly critical of the new vocationalism, arguing that it does little more than provide working class students with basic skills that enable them to perform the routine and bring jobs that most of them will eventually obtain.

Social reproduction is a key term from Marxist theories and it means the reproduction of new generations of workers with the skills and attitudes required for their roles in capitalist society. Another key term is the correspondence theory which is the structure of social relationships at school corresponds to the structure of relationships at work.

As it states in item A that there is great emphasis on equipping pupils with the practical and technical skills needed to contribute to Britain’s economic development and to their own personal success in the field. But the Marxist view is seen that education giving the skill s needed for work later in life is aimed at working class children as they are not ably to become anything else.

Marxist arguments have highlighted the characteristics of capitalist society, rather than an industrial society. This distinguishes Marxists from Functionalists, as functionalist theories offer a positive analysis of education and training. Where as Marxists offer a more pessimistic, critical analysis. They maintain that schools and training programmes do not serve the interests of everyone in society, but those of a ruling minority. Education and training are said to be part of the “superstructure” of society, and that they function to “reproduce” and legitimate social class inequalities.

Structural Marxists such as Althusser and Bowles and Gintis maintain that schools create social compliance through the hidden or unofficial or informal curriculum. They argue that schools socialize students into certain values, attitudes may be overt in certain subjects such as religious studies or economics, but it is mire effective in the subtle and hidden ways that capitalist values are transmitted through the hidden curriculum. These values include punctuality, obedience to authority and an acceptance of alienated work.