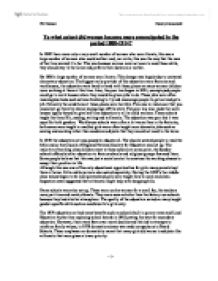 To what extent did women become more emancipated in the period 1800-1914? In 1800 there were only a very small number of women who were literate

To what extent did women become more emancipated in the period 1800-1914? In 1800 there were only a very small number of women who were literate, this was a large number of women who could neither read, nor write, this was the way that the men of the time wanted it to be. This was because women were not seen to need these skills, they should stay in the home and perform their duties as a mother. By 1900 a large number of women were literate. This change was largely due to universal elementary education. The biggest early provider of this education were factories and workhouses, the education went hand-in-hand with these places as many women children were working at them at this time. Also, the poor law began in 1834, unemployed people could go to work houses where they would be given jobs to do. These jobs were often meaningless tasks such as bone breaking to try and encourage people to get out and get a job. Naturally the conditions at these places were horrible. This was to make sure that you would not go there by choice and sponge off the state. The poor law also made the work houses legally bound to give half time education to all its child workers. These schools taught the three R's, reading, writing and arithmetic. The education was poor but it was equal for both genders. Workhouse schools were often a lot worse than in the factories, both sexes were taught to read but girls were often taught more domestic jobs such as sewing and cooking rather than academic subjects that they would not need in the home In 1870 the education act was passed to educate all. ...read more.

These women played a very symbolic part in women's emancipation, as they were role models for other women. "If she can do it then why can't I?" was a common phrase of academic women at this time. However there is a debate about the nature of this change. Was this universal education really meant to free women and aid their emancipation or was this just another form of social control? Sure this looked like women were being given the chance to make more of themselves than just desperate housewives but this could have merely been a way of controlling women to keep them happy so that they could be taught whatever the men in the government saw fit. Another area that has showed a great amount of change for women in the last century is employment. At the beginning of the 19th Century most people lived in a rural environment. With the industrial revolution came a large urbanized working class and growth in the middle class from 1815 onwards. At The beginning of this time most women were employed as farm laborers or worked at home. Up until 1842 women could work down the mines until legislation came out restricting hours and banning women from working down them. This can be viewed in two ways. It stopped women from enduring the harsh conditions that mining involved, however, it can be seen to treat women like children, who need looking after. Women also lost their jobs and would have been without pay, this can be seen as an example of regression, the men made the rules and the women had to follow them regardless. ...read more.

Before 1850, political rights and individual rights were more generally allowed only to men from the wealthier sections of society. Women at this time were thought to b incapable of rational thought and from the mid 18th century women from the wealthier sections of society were excluded from political debates, economics and were expected to behave as a lady should, respectable and refined. Increasingly, women were found to lack the professional training and other forms of specialized knowledge. Prospering merchants and retailers tended to move their homes away form their place of work, leaving their wives and daughters t play their domestic roles in the home thus excluding them from other opportunities in the world around them. There is a lot of evidence to suggest that women were greatly emancipated during this period, there is a lot more evidence to suggest that they were given freedom rather than having it taken away. With regard to the extent of change it is obvious that it differs with different groups. The working classes were emancipated up to a point but after this there is only continuity until further into the future. The middle classes had more of a head start as they were able to get into higher education and into professional jobs although they were the minority group at this time the extent of change was great but with fewer numbers achieving emancipation and dependence. The emancipation of women at this early stage was very important to the rest of woman's history as it gave way to the suffragette years and their campaign for complete equality that followed in the years to come. ?? ?? ?? ?? Phil Durrant History Coursework - 1 - ...read more.