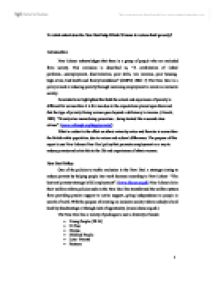 To what extent does the New Deal help Ethnic Women to reduce their poverty?

To what extent does the New Deal help Ethnic Women to reduce their poverty? Introduction: New Labour acknowledges that there is a group of people who are excluded from society. This exclusion is described as, "A combination of linked problems...unemployment, discrimination, poor skills, low incomes, poor housing, high crime, bad health and family breakdown" (ODPM, 2004: 7) The New Deal is a policy aimed at reducing poverty through increasing employment to create an inclusive society. Feminists have highlighted that both the extent and experience of poverty is different for women than it is for men due to the expectations placed upon them and that the type of poverty facing women goes beyond a deficiency in income. (Alcock, 1993) "Poverty also means being powerless...being treated like a second class citizen". (www.oxfamgb.org/ukpp/poverty/) What is evident is the effect on ethnic minority males and females is worse than the British white population, due to racism and cultural differences. The purpose of this report is use New Labours New Deal policy that promotes employment as a way to reduce poverty and relate this to the life and experiences of ethnic women. New Deal Policy: One of the policies to tackle exclusion is the New Deal a strategy aiming to reduce poverty by helping people into work because according to New Labour "The best anti-poverty strategy is full employment". ...read more.

They are also least likely to be at home caring for family or home at just 8%. (EOC, 2004) Both groups had the highest number of lone parents, more than double white women they also had the lowest proportion of marriages. (Social Trends, 2005) Black African and Black Caribbean women achieve the least number of GCSEs (EOC, 2004) but were more likely to carry on their education than white girls. (Census 2001) Chinese: After Asian ethnic groups, Chinese were the most likely to be married and had a lower rate than white groups of lone-parent hood. (Social Trends, 2005) Chinese girls were more likely than any other group to gain five or more A*-C GCSEs and the most likely to continue their education. (EOC, 2004) Unemployment rates were average and they were the most likely to be self-employed. (Social Trends, 2005) Discussion and Conclusion: What is apparent is that there are clear distinctions between the lives and living conditions of ethnic women. New labour want to tackle poverty, discrimination, poor housing but it is less clear how the new deal and employment will apply universally to different women and their circumstances. Research has shown that an increase of women into paid employment has not led to equal status with men either socially or economically. ...read more.

(EOC, 2004) Distinctions between religion and tradition were made by younger generations of Asians rejecting the view that religion prevents them from working whilst the older generations were more inclined to take the view that women should not work outside the home using religion to justify this. Older generations of Bangladesh families were found to have traditional views and may think college or universities will lead to a lapse in religion with implications for family honour and marriage chances. This is likely to impact upon women's educational attainment. (Dale et al, 2002) Despite higher qualifications ethnic women still experienced barriers to gaining employment. For example they also have to deal with the traditional views of their older generations and family life that may mean the independence gained through education is lost. (Dale et al, 2002) This also means that these women may not have as much pressure on them to get a job, as there would be on black women as their values are different. (Dale et al, 2002) There needs to be a lot more research on the differences between ethnic women to establish their employment needs. The New Deal may offer individual advise but it appears not to be relevant to the needs of women in particular but more relevant to the needs of employees' in general. ...read more.