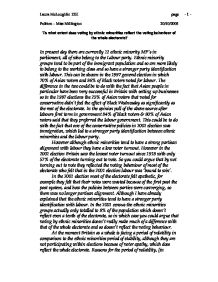 To what extent does voting by ethnic minorities reflect the voting behaviour of the whole electorate?

To what extent does voting by ethnic minorities reflect the voting behaviour of the whole electorate? In present day there are currently 12 ethnic minority MP's in parliament, all of who belong to the Labour party. Ethnic minority groups tend to be part of the immigrant population and so are more likely to belong to the working class and so have a stronger party identification with labour. This can be shown in the 1997 general election in which 70% of Asian voters and 86% of Black voters voted for labour. The difference in the two could be to do with the fact that Asian people in particular have been very successful in Britain with setting up businesses so in the 1997 elections the 25% of Asian voters that voted for conservative didn't feel the effect of Black Wednesday as significantly as the rest of the electorate. In the opinion poll of the above source after labours first term in government 84% of black voters & 80% of Asian voters said that they preferred the labour government. ...read more.

In the 2001 census the ethnic minorities groups actually only totalled to 8% of the population which doesn't reflect even a tenth of the electorate, so in which case you could argue that voting by ethnic minorities doesn't really make much of a difference with that of the whole electorate and so doesn't reflect the voting behaviour. At the moment Britain as a whole is facing a period of volatility in comparison to the ethnic minorities period of stability, although they are not participating within elections because of voter apathy, which does reflect the whole electorate. Reasons for the period of volatility, [in comparison to the period of 1945-70 when there was a strong partisan alignment within classes, parties focused their policies around classes and over 80% of people (the same figure of ethnic minorities identifying with labour in 2001) identified with their party] could be the influence of the mass media on today's society which is changing peoples opinions of the government. ...read more.

the number of ethnic minorities preferred labour in the above source on the whole they do reflect the whole electorate, because although they seem to have a stronger party identification (which I think is because most of them are in the working class) like the whole electorate at the moment they are feeling voter apathy. But mainly because I don't think that your ethnicity is an important factor in which party you vote. I think that other factors such as mass media, judgemental voting and party leader likeability are more important and within these factors ethnic minorities seem to vote the same way as the majority of the electorate. Because no single person will ever reflect the voting behaviour of the whole electorate whether there white, black, 25, 60 have blue eyes or green eyes, because there are so many different factors that influence voting behaviour and because of the period of volatility that is occurring at the moment. ?? ?? ?? ?? Laura McLoughlin 12H page - 1 - Politics - Miss Millington 20/10/2005 ...read more.