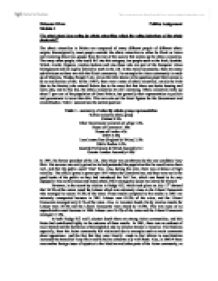 &quot;To what extent does voting by ethnic minorities reflect the voting behaviour of the whole electorate?&quot;

"To what extent does voting by ethnic minorities reflect the voting behaviour of the whole electorate?" The ethnic minorities in Britain are composed of many different people of different ethnic origins. Stereotypically, most people consider the ethnic minorities to either be Black or Asian and alienating these two groups from the rest of the society that makes up the ethnic minorities. The many other people, who could fall into this category, are people such as the Irish, Scottish, Welsh, Jewish, Gypsies, Asylum Seekers and also those who are part of the European Union Enlargement and are legally entitled to work in the UK. In the Asian Community, there are many sub-divisions as there are with the Black community. For example the Asian community is made up of Muslims, Hindus, Bengali's etc, yet on the table shown in the question paper there seems to be no notification of this. In the 1950's, there was a mass of ethnic minorities, mainly the Irish (due to the famine) who entered Britain due to the mere fact that there was better housing and more jobs, and to this day, the ethnic minorities are still increasing. Ethnic minorities make up about 7 per cent of the population of Great Britain, but generally their representation in politics and government is lower than this. ...read more.

general elections and have a different view on who to vote for as they might have experienced the good and the bad times of certain governments. Also, this may have distanced them from the influence of the males. With the Asian community, there seems to be more Hindu women taking up a higher education degree than Muslim women. This means that Hindu women generally will have more 'middle class' thinking than the Muslim women, which makes them think about voting for the Conservatives, rather than Labour, who are historically known for supporting the working class. Women, in both the Asian community have become politicised by the recent foreign affairs. In 1997, Tony Blair attracted a lot of women, and also encouraged them to become MP's, this way he managed to get a lot of votes, however in 2003/2004 women have changed their way of thinking about Tony Blair. Age can also affect the way people vote. Generally, voting increases with age as people become more politicised about the world. Homeowners and parents especially, tend to turnout to vote because of issues that may concern them such as health and education. There are also large numbers elderly people who turnout to vote, generally called the 'grey vote'. The reason that there are so many old people who turnout to vote is because of issues that seriously affect them, such as pension and the cost of providing services. ...read more.

The Welsh nationalists vote for the Labour party and in Birmingham it is also the same. However in London, there is a mixture, some vote for the conservatives, and others vote for labour due to poverty. Black people generally vote for Labour or another party as they see the conservatives as racist and remember the incident which took place when Margaret Thatcher was in reign in the 1980's. About 10/15 young black South London children died in a fire, and she did not even raise the issue or pay her commiserations. Also, before 1895, in Brixton, there was a build up of tension between young Black people and the white police. The laws that the police used were known as the 'sus laws', where the Blacks were arrested on suspicion, and where treated very badly overnight. This lead to the erosion of respect to white people, which was known as 'saturation'. This decreased the votes for both the Conservatives but mainly for Labour as they were the party in power at the time. The same with the Asian community, where there were numerous documentaries on the racism that the police showed, especially in Manchester, Oldham, Bolton, Bradford and Blackburn, where there are strong Asian communities. All of these issues and behaviour can affect the voting of both the whole electorate and the Ethnic minorities, but the recent foreign affairs will most defiantly affect the vote for Labour in 2005. ?? ?? ?? ?? Haleema Khan Politics Assignment Module 1 ...read more.