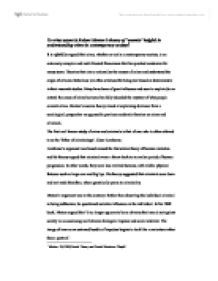 To what extent is Robert Merton's theory of 'anomie' helpful in understanding crime in contemporary society?

To what extent is Robert Merton's theory of 'anomie' helpful in understanding crime in contemporary society? It is rightfully argued that crime, whether or not in a contemporary society, is an extremely complex and multi-faceted Phenomena that has puzzled academics for many years. Theories that aim to rationalise the causes of crime and understand the origin of criminal behaviour are often criticised for being too biased or deterministic in their research studies. Many have been of great influence and seen to explain (to an extent) the cause of crime but none has fully decoded the mystery of why people commit crime. Merton's anomie theory aimed at explaining deviance from a sociological perspective as opposed to previous academic theories on crime and criminals. The first well known study of crime and criminals is that of one who is often referred to as the 'father of criminology', Cesar Lombroso. Lombroso's argument was based around the Darwinian theory of human evolution and his theory argued that criminals were a throw back to an earlier period of human progression. In other words, they were less evolved humans, with visible physical features such as large ears and big lips. His theory suggested that criminals were born and not made therefore, where genetically prone to criminality. ...read more.

They often retreat into the world of alcoholism and drug addiction. They escape into a non-productive, non-striving lifestyle. Finally, rebellion is the mode in which individuals not only reject the required goals and accepted means but alienate themselves from them. They seek to create a society where a closer correspondence will be made between merit, effort and reward. The main part of Merton theory that relates to crime and criminal behaviour is his 'Innovators' strata. This is where Merton highlights the origin of modern day criminality in the western world thus this will be the main focus of this essay. Innovators, as stated above, are those who invent their own (illegal) means of achieving society's success. They are the fraudsters, drug dealers, muggers, embezzlers and even white collar criminals. It is agreeable that many monetary crimes are committed due to financial reward and his theory carries its greatest strength in its explanation of economic and 'white collar crime'. Merton argued that the idea of 'the sky's the limit' encourage people that already have wealth to continue to seek more. This is also seen in large corporations where businesses are expected to continue to make a profit and the businessmen cross the blurred line of what is and isn't legal in corporate finance. ...read more.

His theory was developed in America and was influenced by the American culture and social behaviour. His theory was based around and illustrated by the notion of the American dream, a concept that is not part of British culture, nor a part of any other country in the world. Although similar work ethics are held by various other countries, such ideology is not as upheld as the American dream is for the American people. It is also important to state that the extent to which the British welfare state looks after its people goes further than that of the Americans. Poverty in Britain is of a much lower percentage in comparison to that of America thus Merton's argument of the poor most likely to be criminal will not always fit the British society. It is therefore impractical to generalise Merton's theory and force-fit it to all contemporary societies. However, his work has been very influential in both the policy making process and criminological theories both in Britain and around the western world. Merton's theory does not explain all crime but it has great merit in the ones he attempts to explain. 1 Merton. R-(1968) Social Theory and Social Structure. Chapt6 2 Haralambos and Holborn 2002 3 Merton. R 1968 4 Hagedorn 1996 new perspective in criminology, chapter 13 ...read more.