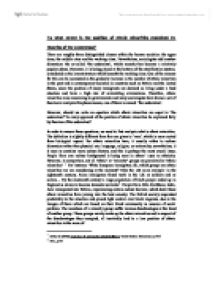 To what extent is the position of ethnic minorities explained by theories of the underclass?

To what extent is the position of ethnic minorities explained by theories of the underclass? There are roughly three distinguished classes within the human societies: the upper class, the middle class and the working class. Nevertheless, sociologists add another dimension: the so-called 'the underclass', which recently has become a relatively popular phase. However, it is being placed at the bottom of the stratification system, considered as the lowest stratum which beneath the working class. One of the reasons for this can be accounted as the gradually increase in the number of ethnic minorities in the past and in contemporary societies in countries such as Britain and the United States, since the position of many immigrants are deemed as living under a hard situation and have a high rate of committing criminations. Therefore, ethnic minorities raise concerning to governments and many sociologists have drawn a set of theories to analysis this phenomenon, one of them is named: 'the underclass'. However, should we write an equation which ethnic minorities are equal to 'the underclass'? Is every approach of the position of ethnic minorities be explained fully by theories of the underclass? In order to answer these questions, we need to first analysis what is ethnic minorities. The definition is slightly different from the one given to 'race', which is more rooted from biological aspect. ...read more.

In contrast, those who do not qualified for a high and stable paid job will drop through the net and became a member of the secondary labour market. Workers within this section mainly are in less important position and thus make up the underclass. Women and ethnic minorities always have the disadvantages in the societies and therefore, it is said they are often likely to become the members of the underclass. Anthony Giddens then pointed out that ethnic minorities are also the victims of discrimination and prejudice.4 Employers in the labour market recruit them to underclass jobs; they get the lowest paid occupations, or are in long term unemployed. However, another finding suggests drawbacks to this way of thinking. The self-employed rate-the ratio of the number self-employed to all paid and self-employed workers-is 14.6% for non-Whites compared to 12.3% for Whites.5 Despite the fact that discrimination accounts for up to half of this difference, ethnic minorities are actively seeking a better way to live and want to get rid of the poverty. On balance, are they really entitled the name of 'the underclass'? On the other hand, sociologist Wilson takes a structuralist approach argues that blacks and Hispanics living in inner-city areas to form an underclass because of forces beyond their control. Historical roots create barriers for them to escape from the ghetto. ...read more.