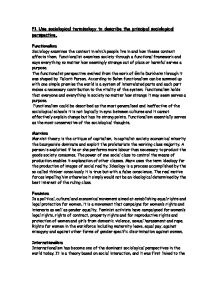 P1 Use sociological terminology to describe the principal sociological perspective. Functionalism Sociology examines the context in which people live in and how theses context affects them. Functionalist examines society through a functional framework and says everything no matter how seemingly strange out of place or harmful serves a purpose. The functionalist perspective evolved from the work of Emile Durkheim through it was shaped by Talcott Parson. According to Bohm functionalism can be summed up with one simple premise the world is a system of interrelated parts and each part makes a necessary contribution to the vitality of the system. Functionalism holds that everyone and everything in society no matter how strange it may seem serves a purpose. Functionalism could be described as the most generalised and ineffective of the sociological schools it is not logically in sync between cultures and it cannot effectively explain change but has its strong points. Functionalism essentially serves as the most conservative of the sociological thoughts. Marxism Marxist theory is the critique of capitalism, in capitalist society economical minority the bourgeoisie dominate and exploit the proletariats the working class majority. ...read more.

Erving Goffman underlines the importance of control in the interaction. One must attempt to control the others' behavior during the interaction, in order to attain the information one is seeking and in order to control the perception of one's own image. Important concepts in the field of internationalism include the "social role" and Goffman's "presentation of self". Collectivism Collectivism is a term used to describe any moral, political, or social outlook that emphasizes the interdependence of every human in some collective group and the priority of group goals over individual goals. Collectivists focus on community and society, and seek to give priority to group rights over individual rights. There are many examples of societies around the world which have characterized themselves or have been characterized by outsiders as "collectivist". On the one hand, there are the socialist governments, which have often nationalized most economic sectors, agriculture in particular, with the exception of Cuba. If these states practice agricultural collectivism, they are often called Communist states. On the other hand, there are Israeli kibbutzim (voluntary communes where people live and farm together without private ownership), the Federation of Egalitarian Communities (non-hierarchical income-sharing intentional communities), and ...read more.

Indeed, postmodernism can be understood as a reaction to modernism. Whereas modernism was often associated with identity, unity, authority, and certainty, postmodernism is often associated with difference, separation, textuality, and skepticism. The New Right New Right ideas were developed in the early eighties and took a distinctive view of elements of society such as family, education, crime and deviance. In the United Kingdom, the term New Right more specifically refers to a strand of Conservatism that the likes of Margaret Thatcher and Ronald Reagan influenced. Thatcher's style of New Right ideology, known as Thatcherism, was heavily influenced by the work of Friedrich Hayek (in particular the book The Road to Serfdom). They were ideologically committed to neo-liberalism as well as being socially conservative. Key policies included deregulation of business, a dismantling of the welfare state, privatization of nationalized industries and restructuring of the national workforce in order to increase industrial and economic flexibility in an increasingly global market. Similar policies were continued by the subsequent Conservative government under John Major and the mark of the New Right is evident in the New Labour government, first under Tony Blair, then Gordon Brown. ...read more.