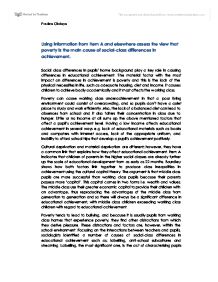 Using information from Item A and elsewhere assess the view that poverty is the main cause of social-class differences in achievement.

Using information from Item A and elsewhere assess the view that poverty is the main cause of social-class differences in achievement. Social class differences in pupils' home background play a key role in causing differences in educational achievement. The material factor with the most impact on differences in achievement is poverty and this is the lack of the physical necessities in life, such as adequate housing, diet and income. It causes children to achieve badly academically and it most affects the working class. Poverty can cause working class underachievement in that a poor living environment could consist of overcrowding, and so pupils don't have a quiet place to study and work efficiently. Also, the lack of a balanced diet can lead to absences from school and it also falters their concentration in class due to hunger. Little or no income at all sums up the above mentioned factors that affect a pupil's achievement level. ...read more.

to generation and so there will always be a significant difference in educational achievement, with middle class children exceeding working class children with regard to educational achievement. Poverty tends to lead to bullying, and because it is usually pupils from working class homes that experience poverty, they find other distractions from which they derive pleasure. These distractions and factors are, however, within the school environment. Focusing on the interactions between teachers and pupils, sociologists identified a number of causes of social-class differences in educational achievement such as; labelling, anti-school subcultures and streaming. Labelling, the most significant one, is the act of characterising pupils to make sense of them or their behaviour. There is an image in schools of the "ideal pupil" and Becker argued that middle-class pupils tend to fall under this category than working-class pupils and this begins the process of a pupil's underachievement. ...read more.

Streaming is also a process within the school environment that affects educational achievement. With reference to Item A, as mentioned earlier, studies show that working-class pupils usually end up in lower streams and middle-class pupils end up in higher ones. Sometimes, this is as a result of teacher labelling, thus widening the achievement space between the classes. Douglas identified that the IQ of pupils labelled as less able and placed in the bottom stream decreased over time, while that of pupils put in top streams increased. Differences in educational achievement aren't just a product of processes within schools; they are also greatly influenced by government policies such as marketisation which increased the amount of streaming in schools. All these factors are interconnected and mutually dependent and so, they all lead to social-class differences in educational achievement with working-class pupils generally achieving less than middle-class pupils mostly because middle-class parents have more cultural capital that enables them get their children into schools ranked highly in the league tables and so on. ?? ?? ?? ?? Pauline Olaleye ...read more.